On World AIDS Day, Sony Pictures Network’s English cluster channels and Viacom 18’s youth channel MTV have come up with their own quirky ways and campaigns to create better awareness about the disease 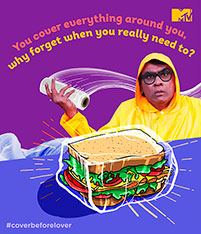 On World AIDS Day, Sony Pictures Network’s English cluster channels and Viacom 18’s youth channel MTV have come up with their own quirky ways and campaigns to create better awareness about the disease

On World AIDS Day today, a few television channels have taken it upon themselves to talk about safe ways to indulge in passionate acts and at the same time give confidence to those affected by the deadly disease.

The world is currently battling with health issues that are fatal but low on awareness, of which AIDS (Acquired Immuno Deficiency Syndrome) is an important one. A recent report by UN reveals that almost 1.9 million people get affected by HIV every year and India is one of the most affected. India has the third largest number of people living with HIV.

To start with, Sony Pictures Network’s English Cluster (Sony Le Plex HD, Sony Pix and AXN) has made an effort in supporting the cause of increasing AIDS awareness by creating messages to build awareness.

Viacom 18’s MTV has also launched a campaign to create awareness about the disease and precautions that can be taken. MTV has come out as a big, bold and brave youth channel in launching the new campaign on World AIDS Day with the message #CoverbeforeLover. The channel explained in a press note: “As a nation, we are obsessed with encasing everything around us in a cover, be it remote control, leather couch, car seats, bikes, cars, certificates, and the list is endless, but when it comes to covering up when it actually matters, we don’t.”

Sony Pictures’ initiatives include changing Sony Pix’s tagline from Stay Amazed to Stay Safe. This is to address one of the most deep rooted causes of AIDS – negligence in safety. The channel is showcasing monster films with the subtle messaging of ‘stay safe from this monster’.

SPN’s English network also has extensive social media plan that supports the cause with #PIXWithWorldAIDSDay on Sony PIX, #LiveResponsiblyLiveRED on AXN and #WhereYouBelong on Sony LePLEX HD.

Saurabh Yagnik, EVP and Business Head, English Cluster, Sony Pictures Networks India, said, “A social message narrated through the medium of entertainment has always been more effective. Our aim is to create awareness and build communication in a subtle yet clutter-breaking manner that integrates with the brand essence for all our English channels. We believe that it is our duty to facilitate awareness for a sensitive subject like AIDS and our strong messaging will resonate with the campaign against AIDS, urging our viewers to be safe and responsible.”

As for MTV, for creating an awareness around the topic of safe sex, the youth entertainment channel has launched a film which is a throwback to the iconic old-school MTV films with a quirky central character – Mr Cover Lover (pronounced as Mr Cova Lova) who suffers from OCD – Obsessive Covering Disorder. The film shows Mr Cover Lover in different situations, cursing the world and stressing the importance to cover everything. He is finally shown with his partner, doing the right thing and covering up. The film lands on the final message of Cover Up before Sexy Time.

A quirky take on the importance of using protection while indulging in sexual intercourse, the film speaks to the youth of India in a language they understand best: humour. The idea is not to preach, but to use humour to create awareness with regards to sexual health.