The campaign will include a new TVC conceptualised by Ogilvy & Mather along extensive sampling activities and digital and OOH initiatives. It shows how Cadbury Fuse brightens up dull moments on a busy day 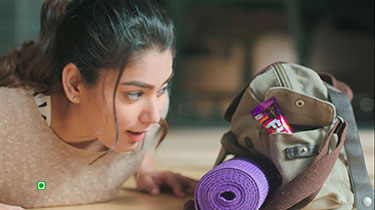 The campaign will include a new TVC conceptualised by Ogilvy & Mather along extensive sampling activities and digital and OOH initiatives. It shows how Cadbury Fuse brightens up dull moments on a busy day

Mondelez India has released a new marketing campaign to support the launch of its new premium countline brand –Cadbury Fuse. Along with extensive digital and outdoor initiatives, the new campaign includes a new TVC that aims at positioning Cadbury Fuse as the perfect indulgent chocolate bar that brightens up dull moments in a busy day.

Conceptualised by Ogilvy & Mather, the TVC begins with a yoga instructor taking a corporate yoga class, guiding everyone with breathing exercises. Moving on to the next exercise, she moves her neck to the side and instructs everyone to follow her. All of a sudden her eyes fall on a life size Cadbury Fuse sliding through the door. The office staff awaits the next instruction but notices that the instructor is already amused by something invisible at the door. The instructor watches as the bar of chocolate comes in from the door, bouncing some crunchy peanuts on its head. Lost in her imagination and excitement, the instructor mimics the bouncing act put up by the chocolate and subsequently the class follows her moves. She then sees the chocolate on the floor and dives to grab it. The astonished class looks around and obediently jumps off the seats, landing with a thud. This is when we realise that the instructor has been fantasising about the Cadbury Fuse in her bag. As she starts eating her bar of chocolate, the entire class still remains on the floor, pondering what instruction will come next.

Prashant Peres, Director, Marketing (Chocolates), Mondelez India, said, “Whether it’s a dull period experienced during long commute hours or an exhausting workout, today's new age consumers are experimental and want to try out diverse experiences that can curb their hunger pangs in newer formats. Cadbury Fuse is aimed at enhancing their eating experiences by giving them a ‘Chocolatey feast’ experience. The new ad dramatises the craving of the young yoga teacher who can’t stop thinking about Cadbury Fuse and ultimately ends up satisfying her craving with a feast.”

Speaking about the creative thought behind the TVC, Harshad Rajadhyaksha and Kainaz Karmakar, Executive Creative Directors, Ogilvy & Mather, said, “The communication is designed to launch Cadbury Fuse as an answer to your craving for a chocolatey feast. We have all been hit by sudden whims and the story here brings alive exactly that in a funny fashion. Joy is in the DNA of chocolate so how could we leave it out of our story.”

In addition to the TVC, the launch will be supported by high decibel digital and outdoor initiatives. With a marketing objective of ‘Owning the Commute’, the brand has rolled out large scale sampling activity with GoAir, Jet Airways and traditional trade stores.