The campaign, conceptualised by Boing, takes a detour from the iconic Hema, Rekha, Jaya and Sushma ad that the brand is best remembered for. But experts BestMediaInfo spoke to say they are disappointed 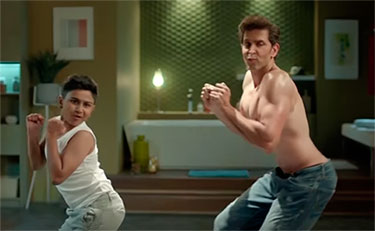 The campaign, conceptualised by Boing, takes a detour from the iconic Hema, Rekha, Jaya and Sushma ad that the brand is best remembered for. But experts BestMediaInfo spoke to say they are disappointed

Any 80s and 90s kid worth their salt will remember the Hema, Rekha, Jaya and Sushma. Neither were these four women our friends nor relatives but they will still be forever etched in our memory, thanks to Nirma.

The washing powder struck gold when it unleashed this highly catchy jingle on the Indian masses. Decades later, the jingle still manages to bring a smile on faces but most importantly instantly brings the washing powder, Nirma, to mind. As jingles are supposed to do, this one serves great brand recall.

The brand has now come up with a new campaign starring Bollywood’s Hrithik Roshan. The ad film, for the product Nirma Advance, has been created by Boing! The ad starts with Roshan entering a party and catching the eyes of a pretty young lady but as he tries to make his way over to her, a kid knocks his drink on his shirt. Roshan then enters the washroom and finds a little boy already there, trying to rinse out the stain on his shirt. The boy and Roshan get into a dance and finally manage to get the stains off their clothes, all thanks to Nirma Advance. This is when the young woman, who had initially captured Roshan’s attention, enters the washroom. The ad ends with the message that Nirma Advance is for ‘Naye zamane ke ziddi daag’.

Speaking about the brief and involving a celebrity for this campaign, Sunila Karir, Founder and Creative Partner, Boing!, said, “Nirma Advance is a relatively new brand launched by Nirma group in the detergent category. Boing! did the first ad campaign for Nirma Advance last year, which did well for the brand’s launch. In the current year, while we had the option of taking that campaign ahead, the client wanted us to also explore the possibility of roping in a celebrity to endorse Nirma Advance and see if it connects better with customers. Since the parent brand Nirma Washing Powder has never had a celebrity endorsement – Hema, Rekha, Jaya, Sushma already being the face of the brand – it certainly made sense to explore a celebrity endorsement on Nirma Advance as it is a relatively new brand with no deep-rooted customer perceptions.”

On why Roshan, a male celebrity, was chosen for this campaign in a category that is cluttered with harassed women trying to get out stains, Karir explained, “When we began to think about our creative approach for the brand, we were pretty sure that with ‘Advance’ being a part of our brand name, our approach should be more forward looking and modern. The brand should be clearly positioned as an advance washing powder for the new generation Indians. We definitely didn’t want to show the stereotypical shot of women washing clothes in our ad. Hence we thought it will be more interesting to go with a male celebrity.”

“Dance and action are two activities celebrities do and this very often leads to sweat and stains. We chose dance since it not only connects well with the new generation but also the parent brand Nirma Washing Powder was built on a great jingle and the famous dancing girl. Hence the client was more comfortable with the zone. The choice of celebrity was quite obvious: who better than the god of dance himself can be the right celebrity to endorse Nirma Advance?” added Karir.

But are they also looking to target a new audience with this campaign?

“It is a little more expensive than the original yellow detergent powder, so it is a more premium product, but the main TG is still women. So we haven’t used a male celebrity to appeal to a male audience but to get more eyeballs from the female audience. Men and youth are our secondary TG. The whole modern treatment of the new commercial is to attract a younger and newer audience,” said Manan Soni, Director, Purnima Advertising.

Purnima Advertising handles the media duties for the brand and is also involved in the digital leg of the campaign along with Ever Media.

BestMediaInfo talked to a few industry experts to understand if the commercial can have the desired effect.

“The ad is surely clutter-breaking due to the use of a male celebrity in a washing powder ad. But merely making Hrithik dance without a storyline is pretty straight forward. The music and Hrithik’s dance moves are the things I like in the ad,” said Somenath Chakraborty, Group Creative Director, Cheil.

“Though Hrithik helps the ad to break the clutter, I feel the iconic Jaya, Sushma were better. The brand could have continued to reinvent Jaya, Sushma and added Hrithik to the mix, which would have been a better transition,” he added.

Ajay Chandwani, Director, Percept India, feels the ad is entertaining even if it doesn’t have the impact of Nirma’s original iconic women.

“Even the Hema, Rekha, Jaya and Sushma film had a pure entertainment quality to it. It is not that Nirma’s advertising is full of content like Surf Excel’s campaigns, which is based on a deep insight (the Daag acche hai campaign). The ad has all the ingredients of an entertaining film but I don’t think it will have the same shelf-life as the Hema, Rekha Jaya and Sushma films,” said Chandwani.

Music has played a very crucial role in building Nirma as a brand. Does this ad hold up that legacy?

Rajeev Raja, Founder and Soundsmith, BrandMusiq, said, “The ‘Washing Powder Nirma’ jingle had tremendously helped Nirma. I think it came when TV was just starting and I remember every cinema hall used to run this ad. The jingle played a huge part in the recognition that Nirma gained almost overnight and it became a huge contender for Surf. The music in this commercial does not have the same impact or potential. It doesn’t pay any homage or reference to the Nirma property, it is a very strong property and they couldn’t contemporise the same. They could have used some eletronica kind of instruments to contemporise the jingle and it could have been a nice funky instrumental, which still brought the Nirma heritage alive.”

MG Parameswaran, Brand Strategist and Founder, Brand-Building.com, is rather disappointed with this new commercial.

“Nirma had moved away from their jingle based (dated) communication to a rather interesting take with their Traffic Jam film a few years ago. This film moved the brand values in the right direction in line with what middle class women were aspiring to do. This one with Hrithik Roshan is just another film with a celebrity. Why is the daag more ziddi? Why the dance? Why a little kid who may help the film score well in pretexts? I am a little confused. I should admit that I am a big fan of brand Nirma having worked on their corporate brand before the IPO. This film beats me. If they wanted to move up the premium ladder, is this the best way to do it? I wonder,” Parameswaran said.

Lulu Raghavan, Managing Director, Landor, thinks that the film isn’t persuasive enough and doesn’t say much about the product.

“The problem here is that Advance seems to be a generic ‘new product’. The new TVC does not communicate anything about Advance and why it is advanced. What is its special difference? How does it stand apart from other detergents? Why should I change my washing powder?” she asked.

Would it have been better had they come up with an entirely new name for the product, thus, doing away with the expectations and baggage associated with the original product?

“I think that the brand name Nirma has a lot of power. The issue may not be with the sub-brand name Advance but that fact that the new innovation may not be anything new after all,” added Raghavan.