Gaana has a song for everyone

In the campaign conceptualised by M&C Saatchi, the music streaming app wants to put across the message that music has the power to turn around unpleasant situations, moods, emotions 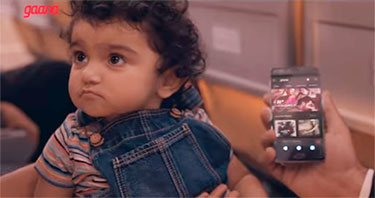 Gaana has a song for everyone

In the campaign conceptualised by M&C Saatchi, the music streaming app wants to put across the message that music has the power to turn around unpleasant situations, moods, emotions

Gaana, the music streaming app, is back with a new campaign -- the fourth one after the company’s maiden launch, ‘Bas bajna chahiye gaana’, followed by ‘Dil ka gaana’ and ‘Gaana paas laye’.

While the first campaign drove the message that there is a song for every situation, the second and the third campaigns talked about the power of songs to create lifelong bonds and bridge gaps between families and cultures, respectively.

Commenting on the campaign, Prashan Agarwal, COO, Gaana.com, said, “We at Gaana believe that music cuts across age, gender, social strata, culture, geography and helps celebrate life in its totality. Music has a power to turn around unpleasant situations, moods, emotions and most importantly music makes us feel good, and in the end, that’s worth a lot.”

Speaking about the thought behind the campaign, Nirmal Pulickal, Managing Director and Creative Head, M&C Saatchi Delhi, said, “Over the years we have evolved this brand from being campus cool, to romantic sagas to quirky, filmy situations. The one thing common in all was a strong melodic hook provided by the original Amit Trivedi song. With the ‘Bawling Baby’ commercial, we looked at a situation which we know is very much part of everyday life. Whenever a baby cries on a morning flight, our sympathies are directed not to the other passengers but to the mother. We empathise with her chagrin, her embarrassment and her concern for the tiny tot. We wish we could do something to help, but we can’t. This commercial imagines an enjoyable solution. Music. Everybody loves music, especially babies. It’s a language that cuts across barriers. The power of music is demonstrated here in a simple, everyday situation.”

“We are now well past the introductory phase of brand-building of Gaana.com. To use a metaphor, the seed has been planted and the sapling has grown. All it needs is proper care and maintenance. A little trim here and regular nourishment. To that effect, we have isolated the strengths of the brand as music, emotion and a strong product connect. This effort is an attempt to build on that and give people and fans what they have come to expect from a Gaana.com commercial,” said, Anjali Nayar, President, M&C Saatchi, Delhi.