Participants include names such as Amit Shah, Arvind Kejriwal, Vasundhara Raje, Nitin Gadkari, Ranveer Singh, Baba Ramdev among others. The two-day event will be held on December 6 and 7 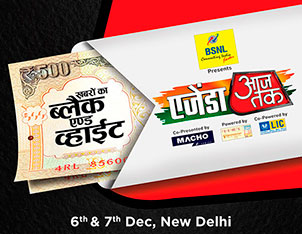 Participants include names such as Amit Shah, Arvind Kejriwal, Vasundhara Raje, Nitin Gadkari, Ranveer Singh, Baba Ramdev among others. The two-day event will be held on December 6 and 7

The ‘Hindi Jagat Ka Maha Manch’ is getting bigger every year as Aaj Tak presents the fifth edition of its annual event, ‘Agenda Aaj Tak.’ The two-day conclave, scheduled for December 6 and 7, will see the convergence of the most powerful and influential faces across politics, defence, entertainment and sports.

With an impressive line-up of the most distinguished stalwarts coming together, the two-day conclave will prove to be defining in more ways than one. This year, Agenda Aaj Tak will discuss the current hot topic of demonetisation and dissect complicated issues on the national agenda in black and white.

The news developments around demonetisation and the recent surgical strikes across the LOC have both become turning points in the national agenda and as the nation goes through this crucial juncture in history. Aaj Tak takes the lead in shaping the way forward by bringing all key stakeholders on one platform. With the pioneering initiative of Agenda Aaj Tak, the channel will once again bring the leaders together to update the viewers on the nation’s agenda.

Agenda Aaj Tak is the flagship Hindi News event from the TV Today Network that has seen the most illustrious personalities coming together to define the National Agenda. The success of the first four editions has clearly established Agenda Aaj Tak as the largest news event in the national language. The event in its fifth year will focus on the biggest subjects in the national mind space right from politics, social issues, industry initiatives, culture and more, thus setting the stage for the most crucial national decisions.