After Hours: Sumanto Chattopadhyay, the actor

Sumanto Chattopadhyay, Executive Creative Director, South Asia, Ogilvy & Mather, started by casting himself in his own play when he was in school. Today, he has acted in many plays and films and dreams to be in a Hollywood mega budget movie some day 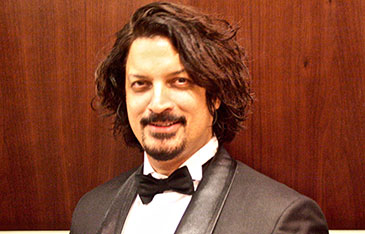 After Hours: Sumanto Chattopadhyay, the actor

Sumanto Chattopadhyay, Executive Creative Director, South Asia, Ogilvy & Mather, started by casting himself in his own play when he was in school. Today, he has acted in many plays and films and dreams to be in a Hollywood mega budget movie some day

It still baffles Sumanto Chattopadhyay a little when people on the street or in the lift look at him and say, “You are the guy from Piku”. Though he played a tiny part in the 2015 blockbuster starring Amitabh Bachchan, Deepika Padukone and Irrfan Khan, the role ensured people stare at him a little longer as he goes about his life.

Chattopadhyay’s tryst with acting began early in life. “For a time I was in a school in Tanzania, Africa. Over there, when I was in Class V, my teacher gave me a plot and asked me to write a play on that. I said okay and wrote it. The play was enacted and I acted in that play. So my first experience in acting was when I cast myself in a play I had myself written1” said Chattopadhyay, laughing.

It took a while for the adman to realise that acting was his passion. After that initial stint with writing and acting in his own play, Chattopadhyay did not act for the rest of his school years or even in college. It was only when he came to Mumbai, after having chosen advertising as a career, that he realised he wanted to do acting.

“I remember that I had gone for a play reading and we were a group of people reading a script and Devika Shahani also happened to be one of the people present at the reading. We read the script and that was it. Then I bumped into Devika on the street one day and she asked me whether I wanted to be in a play. I said yes. The play was called ‘Barefoot in Mumbai’ and was an adaption of the movie ‘Barefoot in the Park’.”

Although he bagged the role, it was not smooth sailing initially. As someone who had never had any formal training in acting, Chattopadhyay found it hard to project his voice, an essential part of theatre.

“For the first few rehearsals, we just sat around a table and read out our parts and the director kept telling me to project my voice. I had no idea what projecting meant and how to do it. Finally, he told me that for the rest of the rehearsals, I would have to shout out my lines.”

He followed what the director said and then it was time to stage the play. Chattopadhyay, who effortlessly wrote a play and acted in it too, was petrified of performing live and kept thinking he would forget his lines.

“The first show that we did was at Sophia College. I remember that for my first scene when I was on stage, I was so scared that my heart was pounding in my chest. The play was about a newly married couple and my first exit was when I have to go buy some liquor and come back on stage, as my character’s mother-in-law is supposed to visit. I had this great sense of relief when I went off the stage. I zoned out and completely missed my re-entry! The other actors in the play were all seasoned actors and I remember Devika saying very loudly, ‘I wonder what is taking him so long?’ The line was not part of the original play, they were just making dialogues up to get me back on stage! That snapped me back to reality and I hastily grabbed the bottle and made my entry.”

The production was a success and the team toured various cities in India and even performed in Dubai.

While ‘Barefoot in Mumbai’ was a comedy, Chattopadhyay has also portrayed Buddha in the play ‘The Life of Gautam Buddha’.

“For that play, there was already a group in Delhi and they had put up a few shows. But they got an offer to perform in the US and they wanted someone else to play the title role. They came to Mumbai to scout. I knew Uma da Cunha and she is a casting director. These people contacted her and she contacted me. Till then I have always had short hair and I was just starting to grow it. So when I was in the auditions, I remember the lady who was auditioning us asking me not to cut my hair. That was when I knew they were really interested. I got the part and they wanted me to go to Delhi for the auditions and then fly out to the US to perform.”

But for Chattopadhyay taking a month off was not an option because he had a job. He still approached his boss at Ogilvy, Piyush Pandey, with the request. Pandey felt it was a great opportunity and encouraged him to go ahead. But it was not all that easy. After all what is a good story without some high voltage drama? The day they flew out to the US was September 11, 2001 – the day a plane crashed into the twin towers and changed America forever.

“We flew from Delhi to Heathrow airport in London and from there flew out to America. Several hours later when we landed, we were back in London. We were literally stranded in the UK and had to fly back to India. As fate would have it, we then did our first performance in Bodhgaya at the Kalachakra Festival. At the end of the performance, they were presenting all the performers with a shawl as a memento and they were placing it on everyone’s shoulders. But when they reached me, they placed the shawl in my hands because I was playing Buddha! So, it was a great responsibility to play someone who is considered God by a certain community, in front of that same community and during their holy festival.”

Acting with Big B

The six-city US tour did happen a year later and was well received by the audience. Chattopadhyay has been a part of around five-six plays since then. He has also been a part of quite a few movies as well, the one fresh in the audience’s memory being ‘Piku’.

“I was waiting for the costume person to give me my costume to wear because the costume that had been stitched for me in the morning was rejected by director Shoojit Sircar. So, before going for the shoot, the designer came with my suit and asked me to go show it to Shoojit. When I went to show him my costume, he just said let’s shoot and I was mentally not prepared at all. But luckily, Amitabh Bachchan likes to rehearse his scenes before giving the take and we started rehearsing. I was so scared during the rehearsals that I just rushed through my lines. Mr Bachchan had to ask me to relax and take it slow.”

Chattopadhyay has also essayed the lead role in a Bengali movie called ‘Tan’ opposite Rituparna Sengupta. Recently he has been a part of two movies called ‘White Bee’ and ‘Murals’ for which he shot in South of France and in Kenya.

Although he loves both the mediums, theatre and cinema, Chattopadhyay feels he is more comfortable doing films. Because he has worked in advertising for long, he knows the medium better and also because it offers him the security of a retake.

Peter Dinklage of ‘Games of Thrones’ fame is Chattopadhyay’s favourite actor. Having learnt Spanish, he is a big fan of Spanish movies. Pedro Almodóvar and Carlos Saura, both Spanish directors, are his favourite.

Any moment that stands out in his memory when he thinks about his acting journey? “There is this movie called Char Adhyay, a film based on Tagore's novel with the same name that I did back in 1997. Recently, I had gone to a book launch, it was a biography of Smita Patil. A very famous movie critique from Mumbai was there. I was just getting my copy of the book signed by the author and this lady came up to me and asked, ‘Weren’t you in Char Adhyay?’ I couldn’t believe she had watched a movie that I had done so many years ago and still remembered me from that movie!”

When asked what acting means to him, Chattopadhyay said, “To me acting is my passion. I believe that it takes you away from the humdrum of everyday life and refreshes your mind. Hopefully, one day I will be doing mega budget Hollywood movies where I can get fame and fortune out of it as well.”