After Hours: Subhash Kamath, the musician

Kamath, CEO and Managing Partner of BBH India, plays the guitar for his band Wanted Yesterday. He is also a singer and songwriter 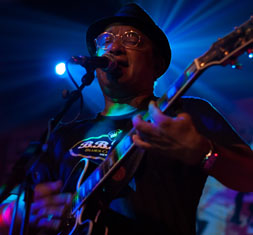 After Hours: Subhash Kamath, the musician

Kamath, CEO and Managing Partner of BBH India, plays the guitar for his band Wanted Yesterday. He is also a singer and songwriter

(BestMediaInfo.com begins a weekly series – starting with Subhash Kamath – on advertising professionals who have enriched their own lives and their audiences as performing musicians, artists, painters, actors, singers, mime artists. We will bring a new adman-performer every Thursday.)

On the second floor of BBH India’s office in Mumbai, I am directed to CEO and Managing Partner Subhash Kamath’s workplace. In a room dappled in the afternoon sun, by the window sits 33-year-old Angelica. Her mocha skin is beautiful, despite being marred by time and her voice just as sweet when the veteran adman who moonlights as a musician first met her.

When Kamath introduces me to Angelica, I could see what is meant by true love. Angelica is Kamath’s guitar that he bought from a musician friend back in his college days and since then she has been an important part of his life.

Being born in a music-loving family, it was routine for his father to play songs on his radio or cassette player every day.

“My father used to play a lot of music at home. He used to listen to a lot of Hindi film and Classical music. As far as I can remember, there was always music playing in the house. So I and my two brothers grew up loving music.”

But the ‘aha’ moment in Kamath’s musical journey came when his father took him and his brother to see ‘ABBA: The Movie’.

“I must have been in Class 9 or 10 when my father took my elder brother and me to watch ‘ABBA: The Movie’ and I just kind of freaked out. In those days ABBA and Boney M were typically the first bands that you started listening to. I and my brother got a cassette from somewhere and we used to play ABBA and Boney M all day.”

This was the time when he discovered other musicians like The Beatles, Simon and Garfunkel, Jim Reeves and Frank Sinatra. His brother introduced him to jazz. “My brother got a cassette of Louis Armstrong and that was my introduction to jazz and Armstrong’s distinct grated voice.”

Kamath’s first tryst with playing an instrument was when he started playing the slide guitar or the Hawaiian guitar.

“I didn’t enjoy playing the slide guitar much. I went for a few classes and then dropped out. When I was in Class 11 and 12, there used to be these fests and I and a couple of my friends got together and started to sing and play Simon and Garfunkel on the guitar. We won some of those fests and lost some but it started a sort of a journey of performing on stage.”

In the movie ‘Music and Lyrics’, Drew Barrymore’s character Sophie Fisher says to Alex Fletcher played by Hugh Grant: “A melody is like seeing someone for the first time, the physical attraction. But then, as you get to know the person, that's the lyrics, their story, who they are underneath.”

The dialogue rings true for Kamath as well who thinks he connects better to songs with lyrics.

“Bob Dylan and Gulzar are two of my song writing heroes. They had a huge impact on me and I started to absorb music beyond just the melody and what those words really meant. For me it was like poetry actually, poetry you could sing and perhaps that is why lyric-based music has always captured a corner of my heart. I love listening to jazz and classical music but for me, I think I connect better when there are lyrics.”

Kamath, who has no formal education in music, learned what he knows from his friends. After completing his education Kamath got directly into advertising when he joined Ogilvy & Mather.

“Advertising is a business that requires you to be in touch with your creative side. I used to go for recordings for shoots and I remember when I was a young account executive, at one of the sessions a musician was sitting and playing some fantastic guitar between takes and there was a singer who was singing fantastically. They were Ehsaan and Shankar, not very famous then, and they were doing a jingle. So, advertising is an industry that gave me a lot of creative learning. Storytelling, filmmaking, photography, music, all that is part of our culture but it is also a very demanding profession. The job itself was a high for me; it was a very hardworking environment where one had to put in many late nights and as a result I stopped playing my guitar.”

For a good 20 years, while he was too busy climbing the corporate ladder, he lost touch with Angelica.

“Leslie Lewis is a very good friend of mine and one day he saw her lying here and took her to this man who used to repair his guitars. This man actually did her up again but without losing the antique look and she has come back sounding so beautiful,” he adds lovingly and with a glint in his eye.

But things took an interesting turn when about eight years ago, while Kamath was with Bates, he was approached to put together a band for an advertising event that was to take place at Taj Lands End. It was to be a fun event to felicitate young achievers in the field of advertising.

“I was the CEO at Bates then and my Creative Director, Rajiv Raja, is a great musician. I asked Rajiv if we could do it and he said yes. So we roped in Prabhakar Mundkur who was the CEO of Percept and with just two or three rehearsals, we put the show together and went and performed. The crowd loved it and more people started approaching us. We started playing at various other events and although we were doing it for fun and playing for our industry folks, it gave me a second lease of life.”

Their first public gig that wasn’t for industry friends came with a performance in Bonobo. The owner of the trendy al fresco bar asked them to play in an enclosed area that could hold 50-60 odd people. The rag-tag band agreed and put the news up on Facebook. They were mighty surprised when some 200 people turned up for the gig.

“It was a great response. After that gig we got a call from Mahesh Mathai who was one of the founding partners of blueFROG. He called us and gave us a date to perform at blueFROG. That was our first big gig and it was very successful.”

After that the band christened ‘Wanted Yesterday’ has been playing every one or two months.

Speaking about the genesis of the name, Kamath explained, “Rajiv and Prabhakar and a few others had formed a band about five years ago. That band didn’t last but the name was still there, so we used the same name. ‘Wanted yesterday’ is an advertising jargon that basically hints at the impossible deadlines in advertising. We also play classic blues and classic rock, which is the music of yesterday, so the name kind of fitted in.”

When asked about a moment that stands out in his memory from his musical journey, Kamath recounts the moment he truly felt like a rock star.

“At this one concert while I was singing, from the corner of my eye I could see a girl throw her shrug (a jacket) at me. The shrug landed on my shoulder but I continued singing. After the paragraph ended, I took it off, kept it on the speaker, and we continued to play. After the concert ended, I wanted to give it back to whoever it belonged to but by the time I went to pack my guitar and came back out, it was gone. That was my rock star moment: I was someone women threw things at!” Kamath said with a chuckle.

A self-confessed blues fan, Kamath has already penned six songs and is just waiting to find the time to compose them so he can release his own album.

Talking about what music means to him Kamath said, “Music for me is an expression straight from the heart. It is a way and a voice to express something that is burning inside you.”