From spending hours sketching people as they went about their life to giving up painting completely for years before finally showcasing his work, K V Sridhar has come a long way and he lets BestMediaInfo take a sneak peek into that journey 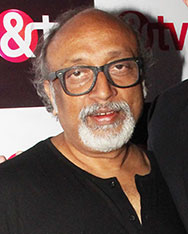 From spending hours sketching people as they went about their life to giving up painting completely for years before finally showcasing his work, K V Sridhar has come a long way and he lets BestMediaInfo take a sneak peek into that journey

It was the 1970s. The place, Moula Ali railway station in Secunderabad. K V Sridhar still remembers the scrawny, young boy with long hair and beard, dressed in a kurta pyjama, who had positioned himself on the over bridge in the station and was sketching away. The boy who was picked up by the railway police because they thought he was a terrorist. The boy who was let go only when he furnished proof that he was an art student. The boy was Pops (as he is popularly known) and you can still catch sight of the intense passion and love for art, which drove him to that bridge, even today in his eyes.

Interested in painting ever since he was a child, Pops is a trained painter.

“I have studied Fine Arts. While I was doing my science course from Osmania University, I graduated from there in Botany, Zoology and Chemistry. I was also doing my painting diploma from Gulbarga in Karnataka. So I used to shuffle between both the colleges.”

With all his love for painting and creating, he wanted to become an architect so that he could build things. But as it has happened to the best of us, Maths played the spoilsport to his plans. Pops realised that he would have to study Maths and Physics and he hadn’t opted for either after completing 10th. He therefore did not have the background to pursue a career in architecture. But as the saying goes, when one door slams shut another opens.

“My family has a film background. My grandfather was a film actor and he was also a theatre exponent. Since he was an actor and a director on stage, he had a lot of books about theatre and set designing. Reading those books influenced me a lot. My grandfather put me on to some people and then I got the chance to be an art director for a feature film.”

Pops believed that the movie was going to be an art film, considering its theme, and put his everything into researching, scouting locations and designing sets. But when the shooting began, he soon realised that it was a commercial film and the idealist in him was somewhat disappointed. But he gave it another shot, this time working with a far more known director and did all the pre-sets work for the film. But as fate would have it, he met with an accident and with that he bid adieu to set designing for good. This is when his stint as a billboard painter began.

“I was always fascinated by these film billboards, the huge 30-40 feet portraits. I have always been interested in portraits and was fascinated by the size. My father had a friend who used to run a huge film billboard company. My father took me there, the friend took one look at me and said you won’t survive here. But I told him that I will do anything it takes to survive.”

The life of a billboard painter was by no means a glamorous one. In Pops’ own words, they were mostly drunk men who slept in terrible conditions. But this knowledge did not deter him from the course, determined as he was.

“Painting billboards was a very difficult task. Physically it was very tiring. They never let me paint portraits first, they would ask me to paint the backgrounds. Then they let me fill the colours on the condition that the artist would come and do the final touch. But they thought I did a good job of filling the colours and let me do the final touch as well.”

But Pops was doing this physically strenuous task while pursuing two courses in two different states simultaneously. Finally it all became too much for him and he stopped painting billboards, but it was not before Bollywood’s iconic film Sholay hit the marquee.

“I painted billboards for Sholay as well. Those days Gabbar was not very famous. In one of the layouts that I made for the film, I made Gabbar a little larger than Amitabh Bachchan and Dharmendra but the distributors told me that he is an unknown guy and I had to re-do it.”

Pops believes that his time painting billboards gave him the confidence that he previously lacked and made his work that much better. He was taught in art school to never copy anything that was already printed. His teachers encouraged him to go out, observe people and then sketch. That is how he found himself at that railway station.

“I was standing on one of the over bridges trying to do a perspective of the tracks. Somebody went and complained that I was making a map of the station. So they took me away. I had to show them my college ID and explain what I was doing. They saw all the sketches I had made and they were finally convinced that I wasn’t a terrorist.”

Before finishing his degree, Pops also worked with his cousin for a while who used to run a small design and typesetting company. He helped his cousin with illustrations and that is where he learned about graphic designing. Once he completed his degree, there were three options in front of him. He had the option to be a drawing teacher in a public school in Secunderabad, work as a medical representative with Parke-Davis or enter the advertising industry. Pops realised that advertising probably was the field that would appease both his inquisitiveness as a science graduate and the artist in him.

“Once I got into advertising, till 1980-1981 I was still painting. But then I stopped. By the time I had realised that advertising was not a time-pass job. My mother always used to say that if you want to play cricket you must play like Gavaskar, meaning that you must give your all to what you are doing and strive to be the best in that. So I thought that while I was in advertising, I should learn enough about it so that I could make some impact. I stopped everything else and started to concentrate on advertising. I went and asked my then bosses to shift me from being a finishing artist to a servicing guy so that I could know the clients better. They said no and so I shifted to another company and joined as an account executive and then advertising took me completely till the iPad came to the market.”

With the introduction of iPad, Pops’ painting got a new lease of life. Painting on an iPad meant you could do it while travelling and while you were on the move.

Pops has so far had one exhibition of his work. The first series based on the girl child is close to his heart as is the cause. He is halfway through his second series called ‘Men from Azampura’,which takes up the issue of people viewing all Muslims as terrorists.

Speaking about the one moment in this journey of his that stands out for him, Pops takes a walk down the memory lane.

“My father has always been diagonally opposite to me. My mother’s side of the family was into theatre and everything and my father was a sportsperson. But in spite of that when he realised that I was interested in art, he encouraged me. I was very little then and these are incidents narrated back to me by family. When he saw me doing a lot of painting and drawing, he did not know how to expose me to art. Being a sportsman he was not very sensitive to Fine Arts, the only people he knew were these union guys. He approached them and told them that his son was interested in painting and since these guys used to make banners and posters, they gave him poster colours, brushes and big chart sheets. My mother still recollects that the chart was so big that I was virtually sitting on it and painting around me. In a way that was my introduction to painting.”

Talking about the artists who have had an influence over him and his work Pops said, “Michelangelo, Leonardo da Vinci, all these Renaissance artists used to do everything. They were painters, sculptors, architects and I have always had this ambition of being a multi-disciplinary artist. I was also influenced by Rabindranath Tagore. I am also like him, a very quiet person interested in music, art, literature. These people have really influenced me to do whatever I am doing in my life and to be who I am.”

When asked what painting means to him, Pops said, “Art not only allows you to capture a person or a situation but it also allows you to simplify it and express it the way you want to. So, you may not understand the other person but you perceive them in a different way and then you can put a different soul into that person because it is all in your control. That really is the beauty of art, you can express your thoughts and you can have your own interpretation.”