Deb, Executive Creative Director with Bang In The Middle, is a restless soul. An adman, artist and now a sculptor, he is on a constant pursuit to give voice to his creative musings 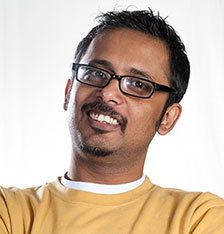 Deb, Executive Creative Director with Bang In The Middle, is a restless soul. An adman, artist and now a sculptor, he is on a constant pursuit to give voice to his creative musings

Manoj Deb still remembers the little boy who used to run home from school, throw his bag and make his way to the temple near his house where idols of Goddess Durga were made.

“When I was a kid, there was a temple in the same lane as my house, where they made idols of Durga. So, while going to school I saw these idols being made and as soon as I was back home, I would rush to the temple to see how much work on the idol the artisan had finished. I was always very curious to see how he will paint the eyes and that is where my fascination with eyes came from.”

Almost all of Deb’s work has eyes as the central theme. “Eyes by themselves make for fantastic subjects but how you depict them is also very important and I am experimenting a lot with them in my work right now.”

Everyone in Deb’s family is a musician and he is himself a trained tabla player. Art happened to him by chance. Waiting around for his Standard 10 results, he asked his artist friend to teach him to paint. He then applied to an art school on a whim. Deb got through in the first try. He still maintains that if he hadn’t gotten into the college, he would never have become an artist. As he had expected, his father was not very happy with his decision.

“Even after I took up the course, for a long time my father used to wonder what exactly I did as I would step out in the morning and return home only by the last train. He then learned that we used to sit at railway stations and sketch. Coincidentally, the day he came to see and figure out what I actually did, we were shooed away from there by the railway police.”

Deb feels the railways have contributed a lot to the art community in the country.

Although he did his course in graphics or commercial art as it was called, the stigma attached with taking up arts did not leave him.

“The general perception is that if you take up arts, you will die of starvation. I took up graphics thinking that I will at least end up with some sort of job. I started working in the third year of my course itself with a very small ad agency and I still remember that my first salary was Rs 600. The moment I passed out, I took off for Delhi. Eventually, I got sucked up in the world of advertising. But I never stopped painting.”

In his family both Deb and his young daughter are painters and weekly jaunts to exhibitions is something they enjoy doing. It was some three years ago that Deb got a call from his old friend, the one who taught him to paint.

“I had been trying to do an exhibition for a long time and that is when I got a call from my friend. He said that he was visiting Delhi for an exhibition. I invited him home and my house is full of paintings. When he saw the paintings, he asked me why I wasn’t exhibiting my work. That was really the day I realised that I could put up an exhibition of my own body of work. So, I joined their group called Sixth Sense and to date I have had three or four exhibitions.”

Now Deb is seriously involved in the arts and exhibitions scene. He has sold many of his works to patrons outside India as well and gets requests for commissioned paintings too.

A restless person by nature, Deb is incapable of sitting still. He has dabbled in sculpting and has also created a six-foot-tall Durga (Hindu goddess) idol out of paper. He also started a club called Delhi Sketching Club.

“Every Sunday morning, from 9-12, I and some of my friends and colleagues do serious sketching. We have had tremendous response so far. People are coming from all over to join us.”

MF Hussain and Van Gogh are two of his favourite artists.

“I believe that an artist should be slightly mad. Ek keeda hona chahiye (you have to have a bug). If creative guys are not a little tedha (quirky), then I think they are not creative.”

When asked to name that one moment in his life that stands out for him in this journey, Deb recounted this interesting day in his life: “One day while I was waiting for my Std 10 results, I picked up my bag and made my way over to this very famous museum in Kolkata called Indian Museum. Artists actually go there and study the sculptures and paintings. I still remember that the ticket was worth Rs 2. I bought a ticket and entered the museum. Once I was in, I saw that a lot of people were sitting there and studying the art, so I joined them. But as luck would have it, the same day an official came as a lot of people would come in without permission and I was one of them. That guy caught me and I showed him my Rs 2 ticket. He asked me to come with Rs 5 the next day and get a two-year pass made if I wanted to sit and study art there. That day I felt like a door had opened for me!”

So, what does art really mean to him?

“It is a part of my soul. It is something I will never lose.”