Amul’s mascot, the round faced, blue-haired girl, has been firing satires week after week, month after month, year after year – and people just don’t mind. She has become part of the Indian ethos. The Amul campaign was started by Sylvester DaCunha in 1966, and his son Rahul DaCunha has kept the campaign going 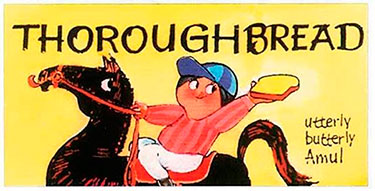 Amul’s mascot, the round faced, blue-haired girl, has been firing satires week after week, month after month, year after year – and people just don’t mind. She has become part of the Indian ethos. The Amul campaign was started by Sylvester DaCunha in 1966, and his son Rahul DaCunha has kept the campaign going

For nearly half a century, India’s most active social satirist has been a blue-haired, round-faced moppet who shoots dairy-based puns on everything from multi-billion dollar financial scandals to government corruption to celebrity gossip. The Amul girl, India’s most famous advertising mascot who has helped turn the company she represents into one of the country’s most trusted brands, has turned 50.

BestMediaInfo caught up with the big fat Indian brand Amul and its agency DaCunha Communications to find out their thoughts as their lucky mascot – the Amul girl – has completed her golden jubilee.

The first campaign was featured in March 1966 when horse racing was becoming big. The outdoor hoarding had the Amul girl riding a horse, with the word ‘Thoroughbread’, followed by the famous slogan, Utterly Butterly Delicious.

Since then to now, the little girl has remained active. Earlier they used to produce a campaign in a week. Now, with the advent of social media, they produce four campaigns a week, which first goes on social media, then hoardings and finally print.

The latest dig that the girl did was when Cyrus Mistry was removed from Tata Sons as chairman. She got curious and said: ‘Ye serious mystery hai!’ Then she could not understand what is happening with the Samajwadi Party lately and said ‘Sabke Samaj ke bahar’.

If Rahul DaCunha, Owner, DaCunha Communications, were to ever name the girl, he would name her ‘Diya’ as he thinks “she is about life and hope. She lights up everybody’s life.”

RS Sodhi, Managing Director, Gujarat Cooperative Milk Marketing Federation (Amul), said that when they started off, they never thought that the campaign would become so famous and the longest running one. He said, “I don’t think any other mascot is known as much as the Amul girl in India. Everybody knows her. In the last 50 years, she has not grown up. She can write anything. Whether you like it or not, you can’t get angry with her. People laugh at whatever good or bad comment she makes. People have accepted her as part of the family in India.”

The core team of three people who work on the Amul girl are the designer, cartoonist and the writer. The writer is Manish Jhaveri; Jayant Rane is the cartoonist and Rahul DaCunha is the ideator/designer. Other than these three, there are seven to eight people who do client handling and the backend chores.

Generally, on Sunday evenings or on Monday mornings, they decide upon the ideas for the campaigns of the week.

He shares a memory when he was not in the country and with the help of internet, the three of them (Jhaveri, Rane and DaCunha) coordinated and worked on one of the campaigns for the brand. “Last year, Manish was in Portugal, I was in Italy and Jayant was in Mumbai. We were coordinating on WhatsApp between three countries. Manish was using the hotel wifi in Portugal. I was using the airport lounge wifi in Italy and Jayant was in the Mumbai office. Jayant was sketching and WhatsApping it to me. I was okaying it and Manish was writing. We have been working for 25 years and understand each other well. We know what typically needs to be done each time.”

Interestingly, the agency never has to get the campaign idea approved before putting it out to the world. Said DaCunha, “After being together for 50 years, we know what not to do. With great job comes great responsibility. I am extremely careful. Eventually Amul is a brand. We are not cartoonist for a newspaper or website. We are advertising a brand.”

DaCunha added, “The main thing is that this campaign is not mine, it is my father’s (Sylvester). Anything that is handed down is what we call legacy. It is really a function of how well we can maintain it. The responsibility becomes more when it is somebody else’s.”

When asked if he has ever felt saturated with thoughts for the Amul girl campaigns, DaCunha replied, “Every day is a new day. The Amul girl is constant but the events and everything are different every single day. We used to do one campaign a week, six to seven years back. Now, we have four campaigns a week.”

DaCunha goes out of his way to emphasise, “The people who drive by the hoardings every day and are active on social media are very possessive about the Amul girl. She is like everybody’s daughter. Even though she is a cartoon character, people are very protective about her.”

It’s a matter of great trust that the brand has bestowed upon the agency. Sharing a 50-year-long relationship has now turned into a family affair. Sodhi also believes that one should never interfere in the creative work that the agency does. He said, “Our founder and chairman, Dr Kurien, used to say you have hired creative people, it is their job, don’t interfere. Let them do what they like.”

Sodhi elaborated on the first brief given to the agency. He said, “When we entered into a relationship with the agency, we told them that we are launching Amul butter and the advertising budget was very limited. At that time Polson was a very famous butter brand. We told them to come out with a campaign through which people would start considering Amul butter better than Polson butter and it should become top of the mind with minimum budget.”

Sodhi recollects that on his daughter’s wedding, he received a poster from the agency’s end wishing her for the wedding. “The relationship with the agency has become like a family thing now.”

Pointing out one important reason why the mascot works for the brand, Sodhi said, “The success of the campaign is because of the consistency. Most people keep on changing campaigns and positioning. Each time we have a different ad but it adheres to consistency.”

Thumbs up from advertising peers

Colvyn Harris, Founder, Harris-Mint, said, “Congratulations to the Amul girl for turning 50, but she remains very eternal and as evergreen as she probably was 50 years ago. She has entertained us and has been witty from a topical point of view. She has shown a unique perspective consistently for 50 years. It’s wonderful to see continuity in advertising, which is why it is iconic and is seen as an example of good humorous linkages with the brand and its values.”

Harris added on the success of the campaign, “The Amul girl and the campaign have been so successful that they never actually want to change. I credit the entire team at the client’s end which has been consistent and not got tired of it, which often happens with other categories. In other categories, the clients get tired and they don’t allow the brand to be consistent in the long term. Brands can be eternal with their thinking, consistency, thinking and strategy. Creativity is finally a function of strategy. That Amul has stayed with its strategy for 50 years is fantastic!”

KV Sridhar, advertising veteran and former CCO, SapientNitro, said, “The Amul girl is a little younger than me. People call her Amul girl all the time. I would have given her the name ‘Amulya’ as she is priceless and ‘Amul’. The age difference between us is only eight years, I would never allow her to grow because she has a certain innocence and way of life, which is so beautiful, cute, honest, transparent and relevant. It is the same way RK Laxman used to approach his political satires. Even his political satires which were so complex in nature, used to come from a very common person's perspective. The Amul girl is also like that. She is connected to anyone.”

Elaborating on how the Amul girl sustained its relevance over the years, Sridhar said, “Nobody can say anything to the Amul girl because she is a little girl. This girl comes from one of those trademark and mascot eras, 50 years back. We had Asian Paints mascot Gattu, Air India’s Maharajah, Pillsbury Doughboy. These were then the voices like the Twitter handle today, through which you could have a conversation. The Amul girl’s value transfers to the brand value of Amul and thumbs up to them for maintaining the brand value. Other mascots died because their metaphors were not universal enough to appeal over time and to live for long.”

Josy Paul, Chairman and Chief Creative Officer, BBDO India, said, "I wish that one day the Amul girl becomes the president of the world. I wish that she wins the Nobel Prize for spreading butter, cheese and cheer. There’s a little bit of the Amul girl in all of us: the utterly butterly lighter side of our lives."

Prathap Suthan, Managing Partner and Chief Creative Officer, Bang In The Middle, wishing her happy birthday, commented, “I remember Amul butter from my school days, from around 4th or 5th standard. It was always part of lunch. So many memories! Even today when I have butter, it takes me back to my school days. When I look at it, I remember it's been along all these years. Almost as old as I am! I really hope you continue to stay young, full of goodness and sunshine. Just as your legendary campaign. May you continue to touch India and all our lives with as much happiness as you always have. Stay utterly buttery young.”