The video, made by Culture Machine’s digital channel Being Indian, is based on the vision behind the #QuakerFeedAChild initiative 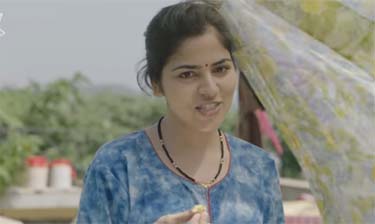 The video, made by Culture Machine’s digital channel Being Indian, is based on the vision behind the #QuakerFeedAChild initiative

One must have, at least once in their lifetime, witnessed a mother trying to feed her child by using the old and time-tested method of one bite at a time, where each new bite spawns a new story, a new strategy.

Taking this thought forward is a new video by Quaker Oats. Culture Machine’s digital channel ‘Being Indian’, along with Quaker Oats, have released a video 'Ek Muthi Sonu ke Naam' to urge people to pause and spare a thought to the millions of children who go hungry. The video is based on the vision behind the #QuakerFeedAChild initiative.

Depicting the emotion of every mother's desire to make sure her child does not sleep hungry, the video takes us through many homes depicting how much effort a mother puts into ensuring her child eats that one morsel of food. Yet, while a few mothers sing lullabies to cajole and feed their child, there are others who don’t have anything to feed theirs. Showing us this disparity and pinching us where it hurts most, the video intends to motivate people to do their bit towards eradicating hunger in whatever little way they can. The video ends with a call to action from Chef Vikas Khanna to pledge to feed a child this festive season, giving details on how one can make a difference.

Deepika Warrier, Vice-President, Nutrition Category, PepsiCo India, said, “We believe that ‘Ek Muthi Quaker’ has the power to make a difference in people’s lives. Quaker Feed a Child is a social extension of what ‘Ek Muthi’ can do. The video articulates a powerful thought urging us all to make every festival more meaningful by simply pledging a fistful to feed a child.”

“It is saddening that despite the progress made by science and technology, hunger still tops the reason for death today. Along with Quaker, we aim to enlighten people about this and inspire people to make a change in their everyday lives in a way to contribute to the society,” said a statement released by Being Indian.