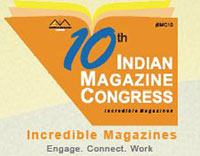 The 10th Indian Magazine Congress was held at ITC Grand Central, Mumbai, on November 9. The theme for the annual event held under the aegis of the Association of Indian Magazines this year was ‘Incredible Magazines’.

The day-long congress saw eminent speakers express their opinions and top publishers speak on the way forward for the magazine industry.

The congress started with an extempore by Derek O’Brien, Member of Parliament and leader of Trinamool Congress in the Rajya Sabha. He shared his memories of starting his career as a magazine reporter, apart from delving on various aspects of the industry.

There were key note sessions by Dr Bhaskar Das, President, Chief Growth and Innovation Officer, Zee Unimedia Limited and Manish Bhatt, Founder and Director, Scarecrow Communications. While the former spoke on ‘Is Formlessness the new form of existence’, the latter captivated the audience with his unique presentation on #DiwalikiSafai--Creativity in Print.

The congress saw a key note speech by Suresh Prabhu, Minister for Railways, who outlined various initiatives undertaken by the Railway Ministry.

Tarun Rai, CEO South Asia, J Walter Thompson, articulated his views on the magazine industry from an agency point of view in an interesting fireside chat.

Maheshwer Peri, Founder and Chairman, Pathfinder Publishing and Harish Nair, National Director, Digital Strategy, GroupM, presented the opportunities that are more perceived as threats in the session of ‘Mobile First’.

The one-day congress concluded with the keynote of Raghav Bahl, entrepreneur, business leader and writer, whose views and presentation on the media mesmerised the audience.

After a day full of learnings and food for thought, the audience enjoyed the first edition of Magzimise Awards that reward excellence in advertising in magazines. Agencies and clients took away the awards, while Prasoon Joshi, Chairman, Asia Pacific, CEO and CCO, India, McCann Worldgroup, shared with the audience his thoughts on life and the source of his creative energies.