The flagship Marathi publication of Dainik Bhaskar, underlines the importance of independent thinking in its ‘Swatantra Vichaar’ campaign. The publication along with Orcomm Advertising has conceptualised and implemented the campaign 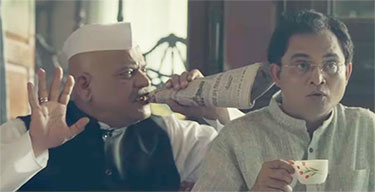 The flagship Marathi publication of Dainik Bhaskar, underlines the importance of independent thinking in its ‘Swatantra Vichaar’ campaign. The publication along with Orcomm Advertising has conceptualised and implemented the campaign

To trigger independent thinking, Divya Marathi, the flagship Marathi publication of Dainik Bhaskar, has recently launched its ‘Swatantra Vichaar’ campaign. The campaign has been conceptualised along with creative agency Orcomm Advertising.

In India, news is frequently spiced up and sensationalised in order to gain higher readership/viewership. The readers get swayed by the media and form their opinion based on what the media exposes them to. Their thoughts remain devoid of independent thinking. Maharashtra mirrors a similar situation.

Girish Agarwal, Director, Dainik Bhaskar Group, said, “Through our ‘Swatantra Vichaar’ campaign, we aim to establish the paper as Maharashtra’s only independent newspaper that helps its readers think independently. Our newspaper champions independent thinking across its pages without any shades of influence.”

Vinay Maheshwari, SVP, Sales, Market Development and Brand Marketing, Dainik Bhaskar Group, said, “Our ‘Swatantra Vichaar’ campaign is in line with our brand proposition of delivering cutting-edge content for our readers. Reader-centric content has been integral to this campaign and we have made sure to keep it intact.”

The day the campaign was started, the key message was revealed in the newspaper and outdoor sites -- Vachan Swatantra Chintan Swatantra (read independent to think independent). The campaign has radio spots running to amplify the same message. Radio innovation has been done and content around films, books, authors and sportspersons championing independent thought has been integrated.

A TVC based on this campaign conveys the idea of how people’s opinion and thoughts get influenced by reading newspapers. The Marathi film opens as a man wakes up. He enters the hall of his house, where a man dressed like a politician is waiting for him, who takes the newspaper, rolls it and holds it like a megaphone and starts talking into the man's ear. Then the man moves out of the house and sees news being spread to others in the same way. A message pops up on the screen and reads, 'If your newspaper is not independent, how can your thoughts be.' A man walks to a group of people who have a newspaper in hand folded as a megaphone. Towards, the end it is shown that he is a Divya Marathi reader. The film ends with the claim-- 'Maharashtra's only independent newspaper'.

The campaign is also being supported by print ads, digital campaign and innovative trade mailers.