Pierce Brosnan’s interview to People Magazine, blaming Pan Bahar for the controversy, came as a shocker and opened the gates of discussion in the advertising and marketing industry. Will the controversy affect the brand? And why did Brosnan react late? 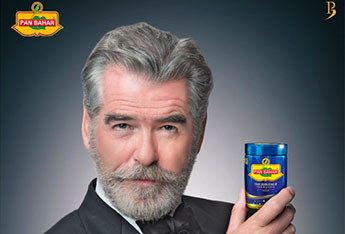 Pierce Brosnan’s interview to People Magazine, blaming Pan Bahar for the controversy, came as a shocker and opened the gates of discussion in the advertising and marketing industry. Will the controversy affect the brand? And why did Brosnan react late?

The morning of October 7, 2016, was an iconic day in the history of advertising and marketing, when everybody saw James Bond star Pierce Brosnan holding a Pan Bahar box in his hands in a print ad. Some applauded the marketing strategy of the brand, while others ridiculed it. The campaign gave social media a chance to have its share of laugh. Nonetheless, the brand managed to trend on the digital front and gained a lot of publicity.

Going forward, there were media reports that the film was banned by the Central Board of Film Certification (CBFC) but it was not. Later, the Advertising Standards Council of India (ASCI) sought an explanation from the brand. Then came another twist in the tale. Brosnan came out in the open and gave an interview to People magazine, claiming he had no prior knowledge that he was endorsing a ‘harmful product’. Brosnan said the company should remove him from its advertisement campaign.

Pan Bahar’s brand manager Vikash Shukla told BestMediaInfo that there was no breach of contract and that the company had written to Brosnan’s team. He claimed the product has no trace of tobacco in its content. Shukla said he would be able to comment once the Bond star’s team replies.

Is the controversy good or bad for the brand?

Harish Bijoor, CEO, Harish Bijoor Consults Inc, believes till the time people are talking about the brand, it is good for it. He said, “The controversy affects the brand, but only positively. I see no negative impact. Pan Bahar has attained much salience as it had never before. The ad has catapulted it into the stratosphere of brands of its ilk. This negative publicity is real publicity for the brand that will make it a talking point in the market.”

Any news is good news for a brand in the space of pan masala. Given the fact that regular advertising is highly regulated for categories such as pan masala, it could be that the brand is happy with the continuous controversy around the advertising endorsement.

Lloyd Mathias, Marketing Director, Consumer PC’s, Asia Pacific and Japan, HP Inc., says the controversy has a negative impact on the brand. He said, “This controversy does not speak well for the brand and the agency handling Pan Bahar. It is absolutely important for the brand to share transparently details about the brand and its product. Not doing so raises fundamental questions. This case raises ethical questions about endorsers not personally trying the brands they endorse.”

Sandip Tarkas, President, Customer Strategy, Future Group, thinks that the brand has only benefited from the controversy, but non-users will not convert into users with the strategy. He said, “The brand got the whole benefit out of it. The brand is operating in a category where non-users will never use the category. It is only for the users who might switch from Pan Parag to Pan Bahar. The company has tried to shift the brand within the category.”

Bijoor asserts, “Ignorance of the brand cannot be an excuse given by any brand-endorser after the event.”

“I don’t have great regard for the category in any case. These people should not be advertising. There is a lot of controversy regarding the health hazard in the category. I don’t think they are very ethical marketers,” said, Ramanujam Sridhar, Founder and CEO of brand-comm.

Where was Brosnan until now?

Everybody who is aware of the controversy is asking one question. Why didn’t Brosnan react earlier? Why didn’t he sue the company? Why is he giving an interview about it instead? Why did it take so long for Brosnan to realise that he was ‘misled by the company’ as he said? Why didn’t it click his mind before that he was endorsing a wrong product?

Some feel it is probably because of the social media outrage that Brosnan realised he should do something about it.

Naresh Gupta, CSO and Managing Partner, Bang In The Middle, makes a very important point, “This strategy is very convenient from both sides. The brand has used him and taken full benefit out of it. Now, Brosnan comes into action and is saying that I didn’t know about the product and it is wrong. Out of the whole thing, saying that it is a tooth whitener, you can’t get lamer than that. Brosnan also put his signature in the ad. Don’t tell me, he did not see the final ad. It is really silly.”

Brosnan should have been more careful before signing deal

It is of utmost importance for a celebrity to double check the brand he is going to endorse. In fact, if the celebrity is endorsing a surrogate product, then he needs to ensure he is not being used in the non-surrogate part of the ad.

Darshan M, Director, Spoment Ventures, said, “It is very important for a celebrity to know details about the product he is going to endorse because you are an influencer and you are going to influence a lot of people. Once you have endorsed a brand, you can’t say that I didn’t know about it. You need to do basic homework and sign the document.”

Darshan said, “It is not that he was not aware of the product. It is just his reaction after he saw the reaction on social media. It is more of the celebrity manager’s job as the celebrity himself has other jobs to focus on.”

Sridhar said, “You shouldn’t hold the celebrity really liable, but this is a case of having second thoughts after making a bad deal. You can’t have second thoughts after taking the money, doing the shoot and releasing the film. He should have done his simple homework. It is a very popular product.”

Brands must give correct information to their endorsers all the time. Equally, it is the duty of the brand endorser to get independent assessments of the brands he or she is about to endorse.

Manish Kumar, CEO and Co-Founder, Digi Osmosis, said, “It is not a lie from a brand’s point of view. They sell the product as a mouth freshener. They are not making him endorse tobacco. It is cancerous because of the long-term effects of kattha. The brand is absolutely right. The blame should go to the celebrity management team. The brand has not cheated anybody; it has just told you that it is an Indian mouth freshener. For the brand, it is a good product.”

Kumar believes that it is more of the celebrity management team’s responsibility. He said, “It was not like Pan Bahar would have entered Pierce’s house and have asked him to sign the documents for the mouth freshener. It should have been the responsibility of the agency that manages Brosnan and should have done the due diligence. The team who handles Brosnan should be held accountable for this.”

This incident for sure will set an example for the advertising and marketing. Going forward, people would write about the topic to learn lessons from it. While the world waits for the next twist, the show must go on.