Conceptualised by Hakuhodo Percept, the new campaign for the company’s premium hatchback car targets consumers with a global outlook towards life 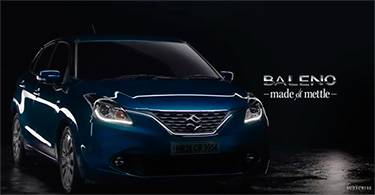 Conceptualised by Hakuhodo Percept, the new campaign for the company’s premium hatchback car targets consumers with a global outlook towards life

Maruti Suzuki’s premium hatchback Baleno is making a whole new statement that’s bolder in your face in its new campaign.

The Baleno was launched last year with the tagline, Made of Mettle. This persona of the car comes from its unique ‘liquid flow’ design, which gives it an aggressive and powerful appearance. Targeted at consumers with a global outlook towards life, the Baleno’s persona reflects their gritty and strong willed traits.

In the latest campaign conceptualised by Hakuhodo Percept, the car’s defiant and intimidating attitude is further unveiled. Captured in a series of three TVCs, the Baleno is portrayed in a very edgy manner, making its message clear, which is spirited with no holds barred. Each TVC is unique in its own way but the common thread that runs through them is an underlying tone that’s unmistakably daring.

Vinay Pant, AVP Marketing, Maruti Suzuki, said, “In less than a year of its launch, the Baleno has sold over one-lakh cars, thereby making a strong statement. The premium hatchback was launched as a car that’s ‘Made of Mettle’, which attributed to its powerful and aggressive appearance. Its bold and defiant persona found instant appeal among individuals with a similar outlook. The latest campaign’s objective is to reinforce the Baleno’s image, and this has been achieved by revealing different facets of the car’s attitude.”

Sabuj Sengupta, National Creative Director, Hakuhodo Percept, said, “Having already established the Baleno’s ‘Made of Mettle’ image, the next step was to define what its attitude is all about, and therefore the new campaign. The edgy tonality associated with the Baleno has been maintained, but this time we’ve upped the bold quotient of the car by several notches; ensuring the car’s persona comes out loud and clear.”

The television campaign went on air on October 5 and is also supported through the digital platform as well as outdoor media at prominent locations.