From October 1, stay tuned to &pictures and witness non-stop entertainment unravel like never before 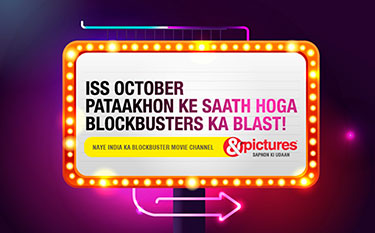 From October 1, stay tuned to &pictures and witness non-stop entertainment unravel like never before

Hindi movie channel &Pictures has a high voltage line-up this October for its viewers. With back-to-back movie festivals, world television premieres and a rock concert that will have the audience grooving to its beats, &pictures promises to deliver a full-blown entertainment experience this festive season.

From October 1-11, the channel brings an 11-day ‘Happy Dussehra Festival’ with the perfect assortment of romantic movies, energy-pumping action thrillers, horror movies and light-hearted comedies. Kick-starting with the romantic entertainer Vivaah, the festival will showcase popular action movies such as Bruce Lee-The Fighter, Gadar and Aan-Men at Work. Adding the humour quotient, movies like Main Tera Hero, Dhamaal and Welcome Back will be aired along with popular movies Masss and Lingaa. To top it all, &pictures will present the premiere of horror flick 3 AM starring Rannvijay Singh.

That’s not all…Bollywood meets Hollywood in ‘Fusion Flicks’ from October 12-22. Hollywood blockbusters like Man of Steel, Ghost Riders, The Amazing Spider Man-2 and Mission Impossible: Ghost Protocol will be coupled with Bollywood potboilers Tamasha, Chennai Express, I.. and Nayak: The Real Hero among other hits. Legendary award-winning actors such as Shah Rukh Khan, Ranbir Kapoor, Deepika Padukone, Nicholas Cage & Eva Mendes among others will be seen on television screens.

&pictures will also present the ‘Diwali Picture Carnival’ from October 23 to November 2. Comprising some of the best family blockbusters from across the globe, this carnival will thrill viewers with Men In Black II, The Karate Kid and Mortal Kombat along with Raja Natwarlal, Holiday: A Soldier Is Never Off Duty and Phir Hera Pheri.

Among the premieres, &pictures will host the World Television Premiere of ‘Happy Bhag Jayegi’ on October 15 followed by the premiere of Baaghi on  October 23.

The best has been saved for the last. On October 23, the channel will air the fantabulous breath-taking Rock On 2 Concert featuring the entire star-studded cast, including Farhan Akhtar, Arjun Rampal, Shraddha Kapoor, Shankar Ehsaan Loy, Purab Kohli and others.