Ideated by Rapport, the outdoor campaign helped Gionee achieve 80-85 per cent dominance in the market over other advertisers 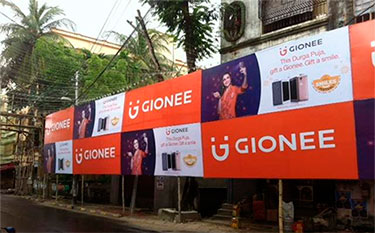 Ideated by Rapport, the outdoor campaign helped Gionee achieve 80-85 per cent dominance in the market over other advertisers

Global smartphone brand Gionee has unveiled a massive outdoor campaign in Kolkata. Capturing over four lakh square feet of space, it is one of its biggest single-city out-of-home (OOH) campaigns in India. Ideated by Rapport, the outdoor specialist unit of media agency conglomerate IPG Mediabrands, this campaign has helped Gionee achieve 80-85 per cent dominance in the market over other advertisers.

“It is vital for us to be a part of the local celebrations as Gionee stands for spreading smiles and we are committed to it,” said Nomit Joshi, AGM, Gionee.

This brand campaign covers 40 Durga Puja pandals in North and South Kolkata, which includes media formats like banners, drop downs, arc gates, rotators, bridge branding, tower branding, island branding and so on. The idea is to create purchase intent and so the entire city has been wrapped in the hues of orange, which is the colour of the Gionee Logo.

Rapport won Gionee’s OOH account earlier this year and launched a campaign for Gionee’s Marathon M5Plus smart phone across 40 towns in India that spanned over 15-30 days. Later, Gionee kicked off the festive season with the massive 52-city campaign for Gionee S6 with Bollywood actor Alia Bhatt that will run for nearly two months. This campaign also covered airports and metros trains in Delhi.