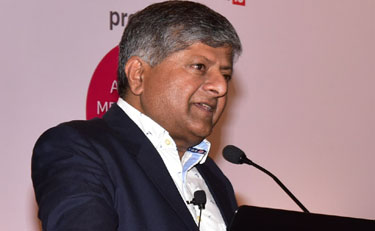 About a year ago, BestMediaInfo.com had put a pertinent question to the industry: TVT or TVR: Who will solve the puzzle? A year on, the conversation has resurfaced and this time it has been kicked off by none other than an industry stalwart at an industry event advocating CPT (cost per thousand) as the future for TV buying.

IPG Mediabrands India CEO Shashi Sinha took to the Media Review platform organised by The Advertising Club in Mumbai last week that was attended by who’s who of the industry to address the elephant in the room called ‘common currency’.

Pressing the need for common currency, Sinha firmly said CPT could be the new metric for buying while effectiveness can be added as a layer on top of exposure. “If we start using CPT as a metric or as a base, it will make a big difference,” he said, making a strong point for TV buying shifting from CPRP (cost per rating point) to CPT.

Addressing Madison Media & OOH CEO Vikram Sakhuja sitting in the front row, Sinha complemented him for piloting this effort about three years ago before he went to the US as CEO of Maxus Global.

According to Sinha, India is among a very few countries that continue to use CPRP. He asked Sakhuja if any large country in the world was still operating on CPRP and got the reply that all big countries are on CPT. Sinha took it as Sakhuja’s endorsement of his point of view and said if GroupM CEO CVL Srinivas was there, he too would have endorsed this view.

“I know there will be some clients who will jump up and down as I say this but one must understand that moving from one metric to another is not going to change the buying-selling relationship because it is independent of the metric,” said Sinha.

Addressing the major concern of advertisers that they might end up paying higher rates for inventories on TV with CPT, Sinha said, “What you buy and sell depends upon demand and supply situation. Metric is something which we get used to.”

CPT is one of the key indicators of growth of the television medium and the impressions it delivers. Sinha connected the need of CPT buying with the growth of television reflected with the arrival of BARC India. “For a variety of reasons, my belief is that CPT makes a lot of sense. It fuels growth. There is a growth in television viewership in India as it an underpenetrated country. We have seen what has happened to rural India. As measurement becomes stronger, there will be improvement. Even the penetration will be higher. We have seen what freedish has done. With all the changes possible I think it is going to be a big time,” said Sinha.

Calling CPT a future currency for buying, Sinha said, “CPT allows inter-media comparison in simple terms and it is the best way to go. With all the changes in measurement that are happening, this is the right time for the industry leaders on every side of the fence to be mature and understand that this is the way to go. BARC is all set to implement a new baseline in the first quarter of the next year which will see 18 per cent growth in TV homes from the previous baseline.”

“I am not saying that I will start buying channels on higher rate because there is a new baseline. That will certainly depend on supply and demand which everyone understands. If we collectively stand up as an industry, it will help us sort out all the issues about digital biting us or digital being cheaper,” Sinha said, resting his case.