The ad film, conceptualised by DDB Mudra West, is an extension of the ongoing ‘Shubh Shuruvaat’ campaign that celebrates the humane side of Indian festivals 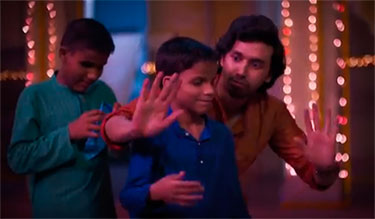 The ad film, conceptualised by DDB Mudra West, is an extension of the ongoing ‘Shubh Shuruvaat’ campaign that celebrates the humane side of Indian festivals

Last year, Big Bazaar emphasised the importance of a harmless Diwali by introducing ‘paper patakhas’. This year the hypermarket chain is back with a new message but delivered through the same old novel ‘paper patakhas’.

As an extension to the ‘paper patakha’ thought and the ongoing ‘Shubh Shuruvaat’ campaign, this year Big Bazaar and DDB Mudra West have crafted yet another heart-warming communication. The intent of the film is to make Diwali celebration inclusive of everyone and the #YehDiwaliSabkiWali intends to drive that message.

The film narrates the story of a Big Bazaar employee visiting a school for visually-impaired children after finishing his shift at the store and celebrating Diwali with the kids there. Gathering them around, he narrates everything he has seen on his way to the school, thus becoming the eyes of the kids in the process. The film progresses to show the employee bursting ‘paper patakha’ with the kids and celebrating the festival with them -- hence, encouraging people to celebrate this Diwali with everyone.

Commenting on the campaign, Sadashiv Nayak, CEO, Big Bazaar, said, “Big Bazaar’s motto ‘Making India beautiful’ is about creating beautiful memories in our customers’ lives. This year, Big Bazaar’s ‘Shubh Shuruvaat’ campaign carries its previous year’s ‘paper patakha’ concept forward, in order to emphasise further the brand’s value of inclusiveness. The campaign is led by a heart-warming film that celebrates the humane side of Indian festivals. This new television commercial talks about celebrating Diwali with everyone, which we believe is the true essence behind the spirit of Diwali. The ad is touching, entertaining, and yet delivers a very important message to all of us.”

Speaking about the message they intend to spread through the film, Rahul Mathew, Creative Head, DDB Mudra West, said, “There’s so much humanity and goodness that the festival of Diwali stands for. But somewhere in the cacophony of consumption, brands often forget that. ‘Making India Beautiful’ is like a guiding light for Big Bazaar. What we started last year with paper patakha making Diwali less polluting and more beautiful, we took it forward this year. The paper patakha helped us make it a festival for everyone and so the thought of ‘Yeh Diwali, Sabkiwali’. In the communication it’s about the physical act of celebration by visually-impaired kids through the ‘paper patakha’. The message we wish to put out is one of opening your thoughts and hearts to include more people in your celebrations.”

The campaign is being led by the film and is being supported by print, digital and on-ground activations. The on-ground and digital communication from the brand will follow this same concept of ‘inclusive celebrations’. The print ads, on the other hand, will showcase Big Bazaar’s wide range of festive gifting options. The brand and the agency have planned interesting activations such as the longest ‘paper patakha ladi’ to promote the concept of ‘paper patakha’ and inclusiveness further.