In order to expand its viewer base, the channel has divided all day time slots into programing blocks dedicated to specific decades of Bollywood cinema 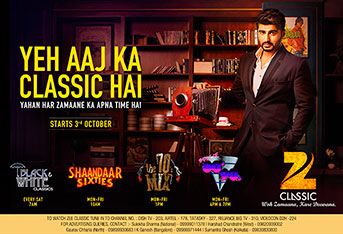 In order to expand its viewer base, the channel has divided all day time slots into programing blocks dedicated to specific decades of Bollywood cinema

Zee Classic, the Hindi movie channel from ZEEL, has formulated a new programming strategy to draw a newer, younger audience. The channel has also launched a campaign under ‘Aaj Ka Classic’ theme with Arjun Kapoor as the brand ambassador.

The channel earlier targeted the age group of 35+ and telecast mostly films from the 60s, 70s and very few from the 80s. With a rejig in content and with an aim to target the new TG (25+), the channel has decided to catalogue movies from each era into a separate time bands -- Black & White, Shandaar Sixties, The 70s Mix, Best of 80s and 90s and India’s Finest Films.

The channel is expecting to add a lot of young viewers on aboard with the evening band (Best of 80s and 90s).

Ruchir Tiwari, Business Head, Zee Hindi Movie Cluster, ZEEL said, “Five years back, we didn’t have younger viewers but today, we see a lot of traction from the younger age group. With the new programming slots, we hope to see more youngsters coming aboard and it will majorly cater to three generations.”

In order to promote it and adhering to its proposition of ‘Woh Zamaana, Kare Deewana’, Arjun Kapoor has been featured in the campaign. With all of this, the channel targets to grab 10 per cent viewership share in the Hindi movie genre, while it currently stays at six per cent with a 33-35 per cent time spent per viewer.

Zee Classic caters to more than three generations with exclusive 500 plus movie titles in its library with its long-term planning and acquisition strategy. The aim is to satiate the palate of diverse and wide ranged viewers, the middle-aged adults, the new age classic viewers as well as the contemporary young adults. Under this campaign and with the theme ‘Aaj Ka Classic’, the channel defines a dedicated time slot to each decade of Hindi cinema.

With the Indian film industry heritage spanning over 60 years and an enviable legacy that only few can claim a right to, Arjun Kapoor is a movie buff himself.

Tiwari added, “At Zee, we have the largest library of movies and now Zee Classic is adopting a strategic time band approach instead of the routine FPC approach. This strategy is a result of meticulous planning, acquisition and programming for an entire year which will ensure that Zee Classic caters to all kinds of viewers. From 2004 to 2010, the channel recorded just two per cent viewership share in the Hindi movie genre. With consistent acquisition of content from different eras along with unparalleled marketing, the channel created a space for itself and a decade later, the viewership has increased to a whopping six per cent in this financial year. Plus, specific era movies on specific time bands will only encourage appointment viewing.”

For the movie channels, appointment viewing has never been seen in the past and never has any channel attempted at it. ZEEL sports seven Hindi movie channels -- Zee Cinema, Zee Cinema HD, &Pictures, &Pictures HD, Zee Action, Zee Classic and Anmol Cinema. All put together, the channel commands 35 per cent of the viewership share in the genre.

As for the contribution in revenues, Ashish Sehgal, Chief Operating Officer, Zee Unimedia Limited, said, “It contributes a massive 15 per cent revenue share in the Zee Hindi Movies Cluster among the SD channels. In the last three to four years, Zee Classic’s revenue has grown more than four times and as it’s evolving. Currently it commands a premium rate at the existing ratings. Zee Classic showcases legendary movies and a Zee Classic viewer is comparatively more involved than on any other Hindi movie channel. For the brand campaign ‘Aaj Ka Classic’, we have locked three channel partners, including SC Johnson, Hindustan Unilever and Dabur across all the time bands.”

Tiwari explains how the viewers, and possibly the advertisers, have evolved in the way they think about the channel. “We have evolved both in terms of the marketing and viewership, which is being noted by our advertisers and viewers alike. The perception of the channel has been quite urban and 35+ till now but now we will be closer to the masses.”

Sehgal added, “Earlier, Zee Classic used to cater to primarily mature audience but with titles from the 80s and 90s being included in the library, the viewership base also attracts the youth. ‘Aaj Ka Classic’ presented by Arjun Kapoor will only further expand the viewer base of the channel. The introduction of time bands is appealing to advertisers.”

A high-decibel 360-degree marketing campaign has been launched on print, TV, digital and outdoor to promote Aaj Ka Classic.

Kapoor said, “I have grown up loving cinema and classics have defined my choices as a viewer as well as an actor. My grandfather, father and uncle have contributed to Hindi films for years and I have fond memories of going on the sets and trial shows. These movies will always be a reference point, always at the back of my mind. To be presenting such classic titles means a lot to me. I am happy that Zee Classic gave me the opportunity to be a part of this campaign and I appreciate their initiative to introduce such time-band led programming on their channel.”

The channel is also contemplating an HD variant but no time has been set. About 70 per cent of the library is HD-ready. Uttar Pradesh and Delhi are the P1 markets for the channel. Other priority markets include Maharashtra, Gujarat, Goa, Mumbai, MP and Rajasthan among others. The channel currently has about 25 per cent reach and a connectivity that is higher than 80 per cent. Tiwari said, “We are quite sure of bridging the 10-15 per cent gap with DAS III and IV coming in. I feel a lot of rural audiences will lap on to this content.”