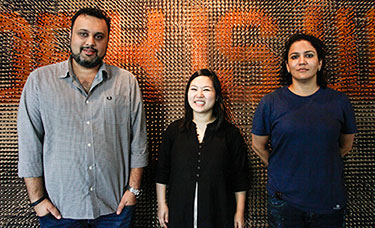 Close on the heels of the successful ‘Da Da Ding’ campaign created for Nike India, and the recent digital and social new business win for the highly sought-after Delhi Tourism account, Wieden+Kennedy Delhi has announced its new leadership team.

Shuchi Thakur has been appointed as Executive Creative Director for the agency. Thakur has had a hand in some of the best creative output this office has produced over the years, playing a key role in groundbreaking work for Royal Enfield and Make in India amongst many others.

Partnering with Thakur as Executive Creative Director will be Molona Wati Longchar. Having worked on brands such as Incredible India, Nokia, Forest Essentials, Royal Enfield and IndiGo Airlines, Longchar is welcomed back into the W+K family after her latest role as a consultant with visual communications firm Design Stash. In addition, she helped set up Nebuzz.com - an online content portal celebrating the culture and creativity of the north-eastern states of India.

Longchar said, “It’s a great feeling to be coming back to W+K Delhi, and being a part of the vibrant and unique culture here. Shuchi and I have had a great working partnership in the past, and I could not be more thrilled about teaming up with her once again and leading the creative mandate together.”

Joining Thakur and Longchar to complete the Delhi leadership team is Sidharth Loyal, who has been appointed as the Managing Director. Loyal is also returning to W+K Delhi after having worked in a range of roles at some of the best agencies across the Asia Pacific region including DDB and Saatchi & Saatchi. His unique approach and vast experience gives him a great understanding of the communications business locally and abroad, and he looks forward to growing the India offering in his new role.

“The communications business is going through a massive shift and what better place than Wieden+Kennedy to help drive and lead this change. I’m really looking forward to partnering with my team and clients to further reinforce the agency’s commitment to growth, by continuing to build a stellar creative product,” said Loyal on his appointment.

Loyal will be taking the reins from current Managing Director Patrick Cahill. Cahill’s role has been to begin a new chapter for the Delhi office, and part of that will be a smooth transition to the new leadership team before returning to the United States with W+K.

Karrelle Dixon, who oversees the whole W+K Asian operations as Director of Emerging Markets, added, “Building on the great momentum that Patrick and the entire office have created in the last year, it is hugely exciting to bring this team together.  The chance to find a leadership team that understood the W+K culture and has the vision to further affect the creative landscape in India was an opportunity not to be missed, especially as we approach our 10 year anniversary in the country.”