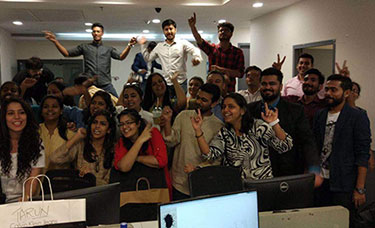 WATConsult, a digital and social media agency, has expanded its Delhi operations. The agency, which is now part of the Dentsu Aegis Network,has added five new accounts to its portfolio along with strengthening its team and moving to a larger office.

WATConsult won the mandate for Indraprastha Apollo Hospitals and CDFI in a multi-agency pitch. For IICE Vodka, the agency will manage the social and digital mandate for their online communityPouritout.comand the two new flavours the company has launched, besides their plain vodka, namely Green Apple and Kinky Chilli.

ForLybrate, a doctor consultation app with more than 1,00,000 doctors on the platform, WATConsult will be handling the social media presence. For BSCI, the agency will handle the digital and social media duties.

Commenting on the new account, Rajiv Dingra, Founder and CEO, WATConsult,said, “After expanding our Mumbai office, we are now focusing on expanding and building our Delhi operations. Our new office setup can accommodatea team of 100+ people. We are glad these brands believed in us and our work and gave us an opportunity to work with them. We look forward to serve them diligently and whole-heartedly.”

“We are very excited to work with these new clients. The team has come up with some extraordinary ideas and we look forward to implement them and launch great digital campaigns,” said Faisal Haq, AVP Operations, WATConsult.

WATConsult is headquartered in Mumbai with branches offices in Delhi and Bangalore.