Kyoorius Designyatra 2016: I am here to do work, says Michael Johnson

Michael Johnson and Prukalpa Sankar, Co-Founder, SocialCops, share why they are at the conference 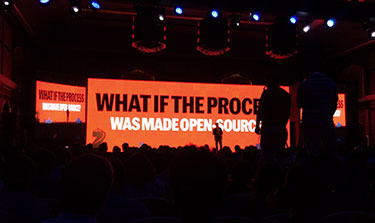 Kyoorius Designyatra 2016: I am here to do work, says Michael Johnson

Michael Johnson and Prukalpa Sankar, Co-Founder, SocialCops, share why they are at the conference

Beginning with the same question that Tony Davidson, Global Partner, Wieden+Kennedy, answered, Johnson answered that he was here to do good work, and to find out interesting problems to solve.

He said he is thrilled to have worked with clients like DEC, Acumen, a social cause where he has worked with a disease named ‘Cystic Fibrosis,’ on how Mozilla is rebranding and lot more.

His favourite campaigns include Acumen and Mozilla. Johnson recollects how they created a series of templates that told the story for Acumen in different ways. ‘Acumen does leadership of what is right, not what’s easy,’ ‘Acumen changing the way the world tackles poverty.’ The brand believes in seeing the humility the world has, the audacity to imagine the world as it could be.

He describes how Mozilla began with the dinosaur logo until lately when they tied up with Firefox to have a globe that is half shadowed by a fox. It is interesting on how the brand is telling its story on social media. It now has an open design blog, which is a great thing. A lot of engagements happen for the brand.

Lastly, he tells us that he never thought it was so easy. He quotes, ‘So, design can make a difference and that’s why I am here.’

After Johnson, Prukalpa Sankar, Co-Founder, SocialCops, shared how she began the organisation and her work experience. SocialCops is a data intelligence company based in New Delhi, India. The mission is to help organisations confront their most critical problems with data and technology. Often, these are also the world's most critical problems — think reducing maternal mortality, increasing agricultural productivity, making sure citizens have a voice in development planning, assessing police performance, or bringing new consumers into the mainstream.

The platform brings the entire decision-making process into one place for quicker, more efficient, more accurate data-driven decisions. Collect, access, transform and visualisation are the key products the platform is built on.

Sankar explained how the organisation works with the government and uses big data from them. Online data -- generated on Google, Facebook and so on-- has inherent limitations in India, where less than a third of the population accesses the internet, approximately 70 per cent of whom are male. Data from the Internet just isn't representative of India’s population. (This problem isn’t unique to India, of course.)

For this reason, it’s important to rely on data collected on the ground. The government is the main organisation that produces data from the ground, whether it’s the National Census that covers almost every citizen of India or the District Information System on Education (DISE) data set that covers 14 million schools across India. Few other organisations have the capability, resources, and desire to conduct regular surveys across multiple sectors at this scale. However, government data is just one of many data sources SocialCops layers in its platform to generate insights for its partners.

Sankar ends her session by telling how the organisation has helped rural households with LPG. She quotes a fact, ‘About 40 per cent of women in India don’t use LPG. The only mode for cooking is chulha (earthen stove) which generates the smoke of about 400 cigarettes in an hour. Getting rid of this is necessary and with the help of data intelligence, women have actually sent pictures of their chulhas so that they can be equipped with LPG.’ And this is why I am here, justifies Sankar.