In a campaign conceptualised by Dentsu One, brand ambassador Akshay Kumar explains how Honda’s combi braking tech with equalizer ensures equal distribution of force between front and rear wheels 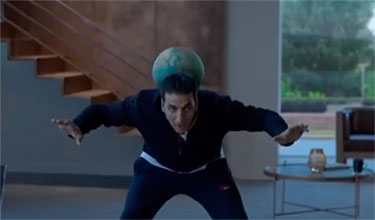 In a campaign conceptualised by Dentsu One, brand ambassador Akshay Kumar explains how Honda’s combi braking tech with equalizer ensures equal distribution of force between front and rear wheels

Honda 2 Wheelers India has released its latest 360-degree marketing campaign where its brand ambassador Bollywood actor Akshay Kumar highlights the importance of balance – not only in life but also on the roads. The commercial is conceptualised by Dentsu One, a Dentsu Aegis Network Company. The 50- second campaign, ‘Combi Brake System with Equalizer’, was launched on September 14 and will be promoted across television, digital, print and outdoor.

The film uses Akshay Kumar as an influencer to draw a parallel between the importance of balance in various spheres of life and an analogy with Honda’s innovative technology. The film personifies balance to depict how simple things are the most difficult to achieve and only a combination of skill, technique and experience helps in achieving perfection.

The target audience of this campaign includes the existing and prospective Honda two-wheeler customers.

The objective of the campaign was to further cement Honda’s image as the leader in bringing customer-centric two-wheeler technology while highlighting how Honda’s CBS with equalizer technology is superior.

The agency had to show how Honda’s CBS with equalizer is more efficient compared to conventional braking systems as it distributes braking force proportionately between the front and rear wheels. It reduces stopping distance and improves stability so that you can ride with confidence with efficient braking in your hands.

Yadvinder Singh Guleria, Senior Vice-President, Sales and Marketing, Honda Motorcycle and Scooter India, said, “In 2009, Honda became the first two-wheeler company in India to introduce the proven CBS technology with the unique equalizer advantage. We are delighted to share that in just seven years, over 1.25 crore satisfied Indian customers are riding confidently with the CBS advantage that Honda has given them much ahead of the times. In the new TVC, get ready to see Akshay once again in his inimitable Khiladi style, sharing how Honda’s unique CBS with equalizer technology is lending balance to daily riding of crores of Indian customers. What is most significant is that this set of customers has chosen the Honda CBS with equalizer technology over others well ahead of the government notifications on CBS to be made mandatory (almost a decade later).”

Titus Upputuru, National Creative Director, Dentsu One, said, “It was a challenging brief. We had to humanise technology and make everyone understand things like CBS and equalizer in a matter of few seconds and also make it engaging and memorable. The globe came handy. So did Akshay Kumar’s athleticism.”

Abhinav Kaushik, Senior Vice-President, Account Management, Dentsu One, said, “Honda’s CBS with equalizer is a big technological innovation by Honda 30 years ago. It reinforces the brand’s commitment to give the most advanced technology with best riding pleasure and utmost safety. Honda’s CBS has given comfort and confidence to more than 1.25 crore Indians in just seven years of its launch and the number is increasing every second.”

The film opens with Akshay Kumar effortlessly juggling a globe and talking about the importance of balance in life, relating it to the balance required in two wheelers for increased stability and confident braking. While balancing the globe, Akshay explains that Honda’s CBS with equalizer ensures equal distribution of force between the front and rear wheels.

The film has a new version of the iconic Honda theme song ‘Dekho Dekhe Ye Zamana’, as the background score reiterates the CBS with equalizer in action and how it is giving added braking confidence to Honda two-wheeler customers. The film ends with Akshay Kumar waving to a child sitting behind his father on Activa 3G equipped with the CBS.