Conceptualised by Ogilvy Advertising, the TVC features Salman Khan who promotes the innerwear brand in a humorous way 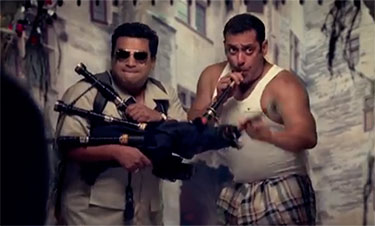 Conceptualised by Ogilvy Advertising, the TVC features Salman Khan who promotes the innerwear brand in a humorous way

Dixcy Textiles has rolled out its new advertising campaign for its innerwear products and roped in Bollywood superstar Salman Khan as endorser. The humorous ad highlights the fit and quality of Dixcy Scott, a popular men’s innerwear brand.

Salman Khan is seen in a new light here as Dixcy Scott moves away from action-oriented campaigns of the past. The film has been conceptualised by Ogilvy Advertising. This is the first campaign for Dixcy Scott after Ogilvy won the account without a pitch process early this year.

The TVC shows Salman Khan listening to a Scottish band playing bagpipes in their traditional skirts. Salman’s accomplice tells him that they don’t wear anything below their skirt. Salman in order to know the truth plays the instrument himself to give them competition. In return, they try to play louder when their inner wears come out. Then Salman says the final line, “They wear but not like us. Dixcy Scott ‘fully elastic fully fantastic’.”

Premji Sikka, founder, Dixcy Scott, said, “The brief to the agency was to highlight the fit and quality of the product. While the brand would love to talk about its entire range of innerwear, talking about underwear when a celebrity is involved would be a challenge. So in the ad while Salman is wearing a vest, the agency managed to include underwear and extend the proposition of ‘fully elastic, fully fantastic’ to the entire men’s innerwear range.”

Talking about the focus of the campaign, Raghul Sikka, Director, Dixcy Scott, said, “The campaign is consumer- focused whereas earlier ones were trade led. The campaign reinforces the thought borne out of customer feedback based on market surveys about high durability elastic of Dixcy Scott underwear and the vests.”

About Salman Khan, Piyush Pandey, Executive Chairman & Creative Director, Ogilvy South Asia, said, “This campaign marks the return of a lethal combination -- Dixcy Scott & Salman Khan. In this campaign, we decided to leverage Salman for his great ability to pull off humour in a way that connects with the masses. The brand promise is captured in a simple and fun line -- 'fully elastic, fully fantastic’. We look forward to a long partnership with Dixcy Scott.”

Discussing how they are different from others, Kunal Jeswani, CEO, Ogilvy India, said, “Advertising today hesitates to deliver a great functional benefit. The ones that try to do it end up being so boring that consumers show zero interest. This one gets it right. The pitch is perfect for the Dixcy Scott brand and its consumers.”

While being one of the youngest in the category, Dixy Scott faces stiff competition from older and established players. The ‘fully elastic, fully fantastic’ campaign is the biggest to go live for Dixcy Scott.

Sam Balsara, Chairman, Madison World, whose agency Madison Media Sigma in Mumbai has the media mandate, said, “We are delighted to have Dixcy Scott once again as our client. I am sure we will do full justice to the brand.”

About ensuring maximum reach, Vanita Keswani, CEO, Madison Media Sigma, said, “To reach out to consumers effectively and in a holistic way, the campaign will run across TV, print, digital, OOH and theatres countrywide. We have taken a focussed media approach concentrating in some markets, which should substantially increase salience of the brand in important markets.”

Dixcy Scott was founded in 1982 by Shri Prem Prakash Sikka, with a vision to create a strong brand that caters to all the segments in the hosiery market. Dixcy Scott has evolved from being an innerwear brand to a lifestyle brand. The latest technology and production units have given both quality and quantity a boost, with over 6,25,000 pieces being produced a day, which are then distributed across 1,20,000 stores.