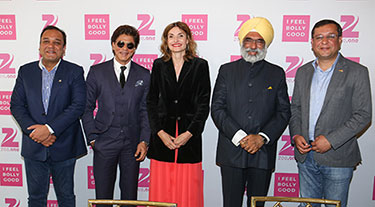 With the tagline ‘I Feel Bolly.Good’, the free-to-air channel will broadcast a great variety of movies and series. The movies will span across all genres, including romance, comedy and action among others. Music clips with dance performances as well as in-house productions will also be showcased.

Speaking about why Zee.One’s launch is special, Punit Goenka said, “As a global media conglomerate, ZEEL is present in 171 countries entertaining over one billion viewers across the world. With our entry into Germany, we are now present in one of the most important and competitive TV markets worldwide. This is what makes the launch of Zee.One special for us.”

Amit Goenka, said, “The launch of Zee.One in Germany is a step further as part of our international expansion strategy. We want to establish a lasting presence and, of course, grow in the German television market. With our highest levels of entertainment, we are confident of being able to offer viewers an attractive enrichment to the existing range of television offerings. We are proud and happy to welcome the German community into our ZEEL family.”

“From today, the German TV landscape will be enriched by a unique, new channel, Zee.One. We want to entertain our viewers with the best of films, series, and music daily, making Zee.One a channel for all the senses,” said Friederike Behrends, CEO, Asia TV GmbH German speaking countries (Zee TV).

The channel intends to target women between the ages of 19 and 59. Most of the content will premiere on German television and will be broadcast in HD. From autumn on, the channel plans to develop and produce its own show formats like magazine shows. Zee.One will be receivable via satellite (Astra) and cable (Vodafone, Unitymedia, Telecolumbus) and will soon be available on more platforms in the German market.