The X Factor UK is back on Vh1

With some favourites returning on screen, the show is set to make a comeback in India on August 30 at 10 pm 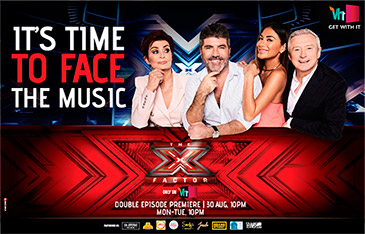 The X Factor UK is back on Vh1

With some favourites returning on screen, the show is set to make a comeback in India on August 30 at 10 pm

The most talked about TV show, The X Factor UK, is back on Vh1 yet again. This time, it’s back with some of the show’s most loved judges. The latest season of The X Factor will air in India on August 30 with a special two-episode premiere, following which all-new episodes of the 13th season will be aired every Monday and Tuesday at 10 pm.

This year, The X Factor will be graced by the presence of Rock royalty Sharon Osbourne, pop sensation Nicole Scherzinger and chart maestro Louis Walsh, who will all sit alongside The X Factor creator and music mogul Simon Cowell on the panel. This season, they will all join returning host, Dermot O’Leary, to kick off the new series. In addition, one of the fans’ favourite aspects of the show has been revived, the legendary ‘room auditions’.

Sabrina D’Souza, Head of Marketing – English Entertainment, Viacom 18, said, “The X Factor UK has always been a favourite among the Indian audience. With its cutting edge format and being the talent hub that it is, it has been a source of entertainment as well as an aspirational platform for our viewers. We are thrilled to air the latest season of this highly-anticipated show.”

Renowned for her straight-talking, Sharon Osbourne was one of the original X Factor judges, appearing on the panel from 2004 to 2007 and then again in 2013. Of course, Sharon has more than 30 years of experience in the music industry, managing some of the biggest bands in rock.

Sharon said, “I’m overjoyed about going back to The X Factor, sitting with Lou, gorgeous Nicole and naughty Simon. But most of all, I can’t wait to meet baby Eric.”

Nicole Scherzinger was a hugely popular judge on The X Factor in 2012 and 2013, securing victory in her first series with James Arthur and proving a huge hit with viewers for her enthusiastic and passionate approach. As a singer, Nicole has achieved global success, selling millions of records both as one of The Pussycat Dolls and then as a solo artist.

Nicole said, “I can’t wait to be back in the UK and on the show with the best judges sitting alongside me on the panel. I'm excited about discovering, mentoring and winning with an exciting new act this year. And having had winning contestants in the past, Simon knows I will do it.”

Music manager and X Factor legend Louis Walsh reprises his role on the panel, returning for a record-breaking 12th series as a UK X Factor judge.

Louis said, “He’d say otherwise but I knew Simon missed me last year. I’m delighted to be back on the panel, especially beside my two favourite female judges Sharon and Nicole, and I’m looking forward to taking them all back to Dublin this year when we head there for auditions.”

Talking about the new series, Simon warned, “Be careful what you wish for!”