Sohil Karia felt going abroad would be a good career option. But this Mumbai lad never thought things would change and Schbang would happen in January 2015. Since then, it has been a roller-coaster ride 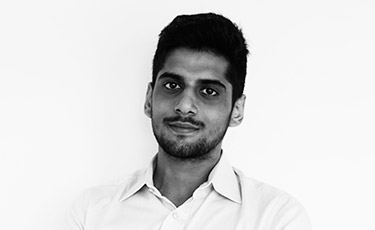 Sohil Karia felt going abroad would be a good career option. But this Mumbai lad never thought things would change and Schbang would happen in January 2015. Since then, it has been a roller-coaster ride

At 25, Sohil Karia has a portfolio which very few in his age can even dream. Co-Founder and Chief Design Director at Schbang, Karia in his six-year journey has worked with clients such as BBlunt, Good Knight and Lodha among others and is raring to go up the ladder.

Born and brought up in Mumbai, Karia did his schooling in Worli and college education from one of Mumbai’s best institutes, the RA Podar College of Commerce and Economics. Karia began his career at an early age of 18 when he started interning with the then start-up, Foxymoron.

From there, Karia went on to be an Art Director at the age of 23. He started working on various projects and was exposed to many things that he had not seen in his early days. In November 2014, Karia decided to quit Foxymoron as Senior Art Director.

At that time, Karia thought he will end up working outside India but destiny had something else planned for him. “It was a coincidence that when I left Foxymoron, my elder brother Harshil Karia and Akshay Gurnani also quit at the same time. In January 2016, Harshil, Akshay and I formed Schbang. It’s been one-and-a-half year of a roller-coaster ride since then.”

On a normal day, Karia’s day starts at 9.30 am if he doesn’t work late the previous day. At times, he stays back in office as late as 11 pm. Though he doesn’t admit he’s a workaholic, his employees do feel so.

For Karia, the first half of the week generally goes in spending time with different teams at work. He has developed an open culture of discussions which helps them grow better. The teams come up with problems and solutions, and such brain-storming sessions benefit the client. Like a veteran once said, “When you are in an agency, you put the client’s needs first, not yours.”

Working on that philosophy, Karia is spearheading a small team, but plans to expand. He believes that the best work is yet to happen in Schbang. “We have worked with clients like Finolex Water, Good Night, BBlunt, Marriager and Lodha among others.”

While the primary focus remains on handling the digital mandate of brands, the agency also provides services such as website designing to clients. Karia has been a crucial part of campaigns for Finolex Water’s world water day, Good Knight’s ‘subah bolo good night’ (say good night in the morning) and #DirtyLittleSecrets campaign for BBlunt.

As a person, Karia is a calm and composed personality. He always believes he should take a step back and see what went wrong, rather than doing it the other way round. In the field that he handles – design -- clients constantly give him feedback. He has learnt to deal with all of that calmly, which is his strength.

Karia’s open and friendly nature encourages his young team to approach him with problems. He feels his understanding nature towards his clients helps him a lot. Karia feels motivating his team can be quite challenging and wants them to give their best with the motto, ‘I can do better and will strive to do better.’

During his free time, Karia loves to watch TV and socialise with friends. “I’m a TV show junkie. You will see me watching television if I’m at home. I became a Game of Thrones fan in its third season and in two days I completed all seasons. Apart from that, music gets me going. It is something that defines a person’s mood.” If you don’t find Karia at home, you know he’s spending time with his friends.

Karia idolises his brother and father. He feels lucky to have a brother who is from the same industry.