Unlike most kids who are clueless about what they want in life, Prachi Maroo knew from a very young age that marketing was her calling and that she was not built for the rigid structures of the corporate world 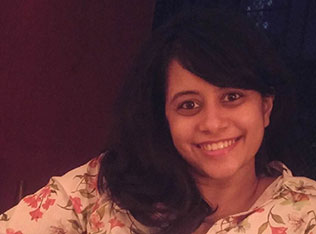 Unlike most kids who are clueless about what they want in life, Prachi Maroo knew from a very young age that marketing was her calling and that she was not built for the rigid structures of the corporate world

Born and brought up in Mumbai, Prachi Maroo knew right from the beginning that she wanted to be in the marketing field. Unlike her peers, she was confident that she wasn’t meant for the corporate world and its rigid structures.

“Most kids are not sure where they are going and what their plan is but I have actually been the opposite. I have always been a kid who has always worked towards something very specific. I was certain from the ninth grade that marketing excites me. I also knew that if there was one thing I could not do then that was working in a corporate that has silos and defined roles,” she said.

Maroo finished her schooling and enrolled for a commerce course and from there she decided to pursue mass media and do advertising. This is when her love affair with digital marketing began.

“When I pursued mass media I realised that there was nothing like digital marketing. That there is nothing as dynamic and as fluid.”

After completing her mass media course, Maroo joined Radio City and managed digital marketing for them for three years. From there she moved on to Ogilvy. She worked at Ogilvy as an account planner at a group head position for two-and-a-half years and was the key planner for Vodafone India before The Glitch happened to her.

Recounting her interesting start at the organisation Maroo said, “I was actually going to take a break after my stint at Ogilvy. It also happened to be a time when I was going to undergo a surgery and it felt like the best time to take a break, relax and figure out “What next?” The Glitch was in constant touch with me and asked me to give them a visit. When I came here I spent about 40 minutes with Rohit Raj, who is the Co-Founder of the Glitch. After those 40 minutes, Rohit realised that he was interviewing me for the wrong role. The interview was supposed to be for a creative role but after the meeting he asked me to wait and Pooja Jauhari, who is our CEO now, and I had quick chat. The minute I met the both of them I knew I needed to be at this place.”

Maroo, who joined The Glitch as a group head in client strategy, went on to become their Business Director for Bombay in less than two years. Currently, along with leading business for all of Bombay she also leads the Account Planning and Management team. In her time with The Glitch, Maroo has helped build new services, categories and newer brands and worked on projects like the Lakmé makeup pro app, Set Wet Book of Style, Flipkart’s “Do Thumb Thing” campaign among many others.

When asked to name the one thing that drew her to digital marketing Maroo said, “My major infatuation with digital marketing was how hard it was to put a boundary to it. The more certain you are that social or mobile marketing is the pinnacle of digital, along comes AR and VR. Every time we scale a new height, we discover a new sky and being able to learn and do more is a prospect I consider fantastic.”

Maroo believes that every project is challenging.

“When you are at the agency side of things you literally have 24 hours to deliver everything. It could be a post or the biggest campaign that the brand and you have planned together, it is always challenging.”

But she considers the biggest challenge to be constantly buying beers for a team full of rockstars. “They do so much good work; it’s a task to keep buying beers and donuts.”

A board game enthusiast and a lover of infinity pools, Maroo thinks that if not in digital marketing then she would probably have been a business consultant.

Maroo thinks her biggest weakness is that she is a ‘hangry’ person.

“I am extremely difficult when I am hungry and unfortunately in the job and the industry that we are in, one is hungry many times. You are often running from one meeting to another and are just constantly on the go, which leaves you very little time for food. So we actually make sure that our lunch is here even before we are. But yes I guess that has to be a weakness.”

Her biggest strength according to her is that she is a problem fixer.

On the future of digital marketing, Maroo said, “Everything is now a part of the once small digital pie and brands acknowledge it. It’s important for brands to find a way to make their story relevant almost every time, perhaps in a new way or even a new story. The exciting thing is that there is no one prescribed way of telling stories or doing things on digital.”