Gosavi’s world is an artistic place and not a single day of her life passes without her making any piece of art, be it doodles or sketches. A fan of KV Sridhar (Pops), Chief Creative Officer, SapientNitro, she says how creativity runs in her family 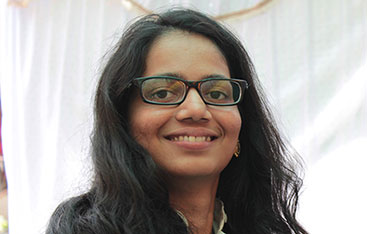 Gosavi’s world is an artistic place and not a single day of her life passes without her making any piece of art, be it doodles or sketches. A fan of KV Sridhar (Pops), Chief Creative Officer, SapientNitro, she says how creativity runs in her family

Ever since her childhood, Gosavi was inclined towards art and the creative field. But because her father wanted her to become a doctor, she went for science after the 10thstandard. Though she was a meritorious student throughout, her passion for art and design stopped her from pursuing a medical career. After schooling, she studied Bachelor of Fine Arts from one of the best art colleges-- Sir JJ School of Arts. In her stint at the art college, she won one of the CAG (Communication Arts Guild) awards for her paper crafting illustrations.

Gosavi wanted to pursue a career in design but got an opportunity to work as an intern in Ogilvy & Mather in 2010. Over there she conceptualised the idea of ‘eye fold’ to save paper, which was liked by her seniors and was implemented in-house. Vodafone liked the idea and used it. This concept was admired abroad and won accolades at the Cannes festival too.

Gosavi is one of the designers of the start-up Taxi Fabric. It is an initiative where designers have come together and created pretty fabric designs for the ‘Kaali Peeli’ taxies of Mumbai. The aim is to popularise these traditional taxies, whose demand has fallen after the advent of Uber and Ola.

Later, she joined Leo Burnett in 2013 and worked for brands such as Tide. In 2015, Gosavi joined SapientNitro. “SapientNitro is a pretty good place in terms of work. I wanted to explore the digital field, rather than doing the typical regular kind of work. So, I decided to move to SapientNitro. I also wanted to work with Pops. The best part is that the agency is a collaboration of art and technology.”

Explaining her interest in the field of creativity and art, Gosavi said, “Since childhood, my drawing was good. I used to participate in drawing competitions and win prizes. Art is in my family. My dad is a draftsman and he is a good calligrapher too. He used to design wedding cards and screen-print them. My elder sister is an architect. So, creativity is in my house. I have loved drawing since my childhood. My mother has a pretty good taste in clothing. Twenty years back, she used to stitch the kind of clothes that are trending now.”

Gosavi deals with stress well, unlike her earlier days in her career when she wanted to prove her metal to the world. She creates doodles when in stress. She says, “After six years of experience, it is a bit relaxed now. Yes, stress is there but art helps me get out of it. Art is my passion.”

Explaining her work profile at SapientNitro, Gosavi said, “Every day is a new day. I am executing campaigns, designing websites and experience centre. I am happy with this because I am always doing something different. People consider my work edgy and different. To create something new every time is challenging, but definitely satisfying. I don’t have a particular style and want people to recognise me as an artist.”

Gosavi definitely admires Sridhar and is all praise for him, “Even after being so senior and the head of the agency’s India operations, we talk like friends and our bonding is very good. I am like his daughter.” She said the work environment at the agency is pretty relaxed. “If there is no work we go for a movie or a play and Pops is pretty easy about such things. It’s not a typical corporate type of an atmosphere. We work like a family and it helps a lot for our creativity to enhance.”

Gosavi finds JSW Steel’s ad film on wrestler Geeta Phogat as one of the best she has seen. She generally likes ad films that have a lot of storytelling. She liked the campaign ‘Thank you mom’ done by P&G abroad.

At the beginning of her career, Gosavi was very stern about the fact that she would never compromise on the work she does and would never do something which she doesn’t like.

Gosavi’s life’s philosophy is to always create something good and have an impact on the society. “I am not asking to solve the world’s problems, but through advertising, we can at least solve somebody’s problem.”

Gosavi strongly believes digital has a long way to go in India and is just an extension of technology. It is another medium for people to express and to tell stories. “For India and Indian clients, digital is all about Twitter and Facebook. We are a little bit behind in terms of digitisation and will take at least 10 years to come abreast with international levels,” she said.