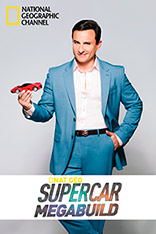 The series will feature some of the most iconic and uber luxurious cars going through transformation and overhauling into desirable and fantastic machines. The show promises to be a treat for car enthusiasts and will take a look under the hood of some of the most unique automobiles ever made.

Commenting on the series, Swati Mohan, Business Head, India, Fox Networks Group, said, “We are excited to bring back Nat Geo Supercars, one of our top-rated franchises on the channel, and one that reaches a whole new level this year. And hence when it came to choosing a face for this year’s Mega season, we didn’t really need to look beyond Saif Ali Khan. His love for luxury cars or any high-end machinery, together with his passion for the science and technology that goes behind it, makes him a perfect choice and we are delighted to have him on board. This new season reinforces Nat Geo’s commitment to give viewers unprecedented access to not just unique content, but also world-class talent and storytelling.”

Actor Saif Ali Khan said, “Nat Geo is an iconic brand that stands for adventure and great storytelling among other things. It feels great to be associated with this exceptional team of Nat Geo. As for the show, I am personally inclined towards four-wheeled, good looking, mean machines which the show features. The most exciting part of the show is when these supremely creative designers and technicians get together to transform some of the highest performance, uber luxurious automobiles to beyond imagination Supercars. I am sure the show will drive excitement in the audience too. ”

The new season of Supercars will be hosted by world renowned automotive designer, Afzal Kahn. In each episode, Kahn and his team will embark on an ambitious mission to transform a high-performance car into an extraordinary supercar, fit to take on the next challenge. Watch the transformation of a Rolls Royce into a drifter; high-performance supercar Nissan GT-R turn into a nasty beast to beat Bugatti Veyron in a straight quarter-mile race; or even a Range Rover Evoque that turns into a rally racer.

Every episode of Supercars brilliantly showcases engineering and manufacturing marvels that go in to making a supercar. This offers a great opportunity to advertisers to associate with a jaw dropping line-up of automobiles.