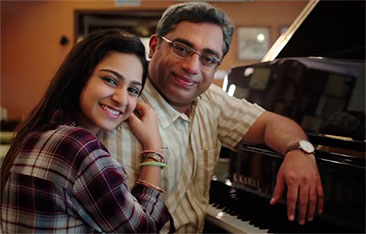 Kotak Mahindra has come up with a new TVC, Kona Kona 6%, to reflect the upbeat mood in the nation due to a good monsoon. The Kona Kona Kotak campaign was first conceptualised when ING Vysya Bank merged with Kotak Mahindra Bank in April 2015. The aim of the campaign then was to highlight the bank’s enhanced network across the country.

The new TVC, conceptualised by Cartwheel Creative Consultancy Pvt Ltd, uses the backdrop of rains to narrate stories of prosperity from different corners of India and conveys the message that the bank continues to offer 6% interest on savings accounts with a balance above Rs 1 lakh.

The TVC shows people from different parts of the country celebrating and enjoying the prosperity associated with a good monsoon. This prosperity and good spirit is conveyed through instances like a father buying a piano for his daughter, a farmer buying a new tractor, a rickshaw driver taking his family to a multiplex for a film, a young woman treating street children to a pizza among others.

Explaining how Kona Kona 6% is an extension of the Kona Kona Kotak campaign, Karthi Marshan, Sr EVP & Head, Group Marketing, Kotak Mahindra Bank, said, “India is witnessing a good monsoon this year after two consecutive dismal seasons. Good rains lead to positive sentiments, and we can feel the excitement at the grassroots levels. Our new Kona Kona 6% campaign captures this mood of cheer and optimism.”

Marshan added, “Kona Kona 6% is an extension of our Kona Kona Kotak and the recent 6% campaigns. It emphasises how we are contributing to people’s prosperity with something as simple as higher returns on savings account, thereby enabling them to fulfil their aspirations. The campaign also showcases how different customer segments are benefiting from our wide range of products and services.”

“In an environment where interest rates are headed southwards, here is an opportunity where anyone can earn 6% on their savings account balance. Add to this, the tax exemption on interest earned up to Rs 10,000 and customised propositions for children (Junior), women (Silk), citizens over 55 (Grand), etc., that bundle several features in addition to 6%, and the benefits for customers grow manifold,” he added.

Speaking about the challenges they faced while working on the campaign D Ramakrishnan, CEO, Cartwheel Creative Consultancy Pvt Ltd, said, “After the overwhelming success of the Kona Kona Kotak campaign, the challenge was to find a worthy successor to it. One that connected the dots of Kotak’s geographic spread, India’s buoyant economy, and the 6% story. The answer was to tap into India’s annual obsession -- the monsoon. The monsoon is a harbinger of prosperity and happiness. Its passage through the length and breadth of the country is avidly followed by everyone. Like in the earlier campaign, we decided to present Kotak as just a small part of this story --a contributor, not the architect.”

“The campaign across TV, radio, outdoor, and digital celebrates the happiness of people enjoying their prosperity. The narrative of the film reads like a weather report, except that it doesn’t talk about the rain. It describes the wave of prosperity. The outdoor campaign echoes this sentiment with joyous images and the campaign slogan of Kona Kona 6%,” he added.

The TVC will run in seven languages (Hindi, Bengali, Gujarati, Kannada, Marathi, Tamil, and Telugu) on leading channels across India. Radio will be leveraged for the campaign. The radio script will follow the TVC script and will be presented in the format of a weather report. In addition to the languages above, the radio campaign will run in Punjabi and Malayalam. The outdoor campaign is set against the backdrop of rains and will portray happiness and convey the key message of Kona Kona 6%. The campaign will run in Mumbai, Chennai, Bengaluru, New Delhi, Hyderabad, Kolkata, Ahmedabad and Pune. It will be promoted on social media platforms such as Youtube, Twitter, Facebook.