Unlike previous seasons, the show has got this slot starting July 30 instead of the Sat-Sun 9 PM slot which has been given to ‘24 Season 2’ 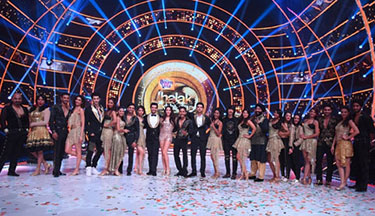 Unlike previous seasons, the show has got this slot starting July 30 instead of the Sat-Sun 9 PM slot which has been given to ‘24 Season 2’

The celebrity dance reality show ‘Jhalak Dikhhla Jaa’ is back on Colors but in a new time slot. Unlike previous seasons, the show has got the Saturday 10 PM slot starting July 30 instead of the Saturday-Sunday 9 PMslot which has been given to ‘24 Season 2’. ‘Comedy Nights Bachao’ has been shifted from Saturday to Sunday at 10 PM while ‘Comedy Nights Live’ has been taken off air.

For the fifth year in a row, Cadbury Bournvita has continued its journey as presenting sponsor of the show which is powered by Renault and Amazon.in. The channel has signed on Ultratech Cement, Parachute Advanced Gold and Stayfree as associate sponsors while UC Web Browser is the trending partner of the show.

Commenting on the new season, Raj Nayak, CEO, Colors, said, “What surprises me every year and pushes us as a channel to put together a show of such mammoth proportions is the enthusiasm of the celebrities who astonish us with their eagerness to participate in the show and bring out their flair for dance in front of their zillion of fans. The platform is so huge that whether you win or lose, you take away something from the show which holds you in good stead for years to come.”

Nayak further said, “Along with Karan and Ganesh, we have on board this year the very dazzling Jacqueline Fernandez who has been keen on making her television debut through this show. Then there’s our favourite Farah Khan who oozes entertainment in everything that she does.”

About the sponsors, Nayak said, “Jhalak DikhhlaJaa and Cadbury Bournvita, presenting sponsor, is a wonderful match. Our five-year-long partnership is testimony of the strong relationship we share to not only create innovative brand integration avenues but also leverage our combined brand goals. Further, we would like to extend a warm welcome to Renault and Amazon.in as the show’s co-powered by sponsors and hope to strengthen our association with them through many such marquee shows.”

Manisha Sharma, Programming Head, Colors, commented, “This season goes back to the basics of dancing, making the contestants showcase each performance striking a balance of uninhibited oomph, innate grace and a brilliant sense of rhythm. While the jury will share their expert opinions, the in-studio audience has the veto power to choose which contestants will stay or will be evicted. Each contestant will have one mission: to create a lasting impression with their dance moves.”

Myleeta Aga, SVP and GM, BBC Worldwide, India and Content Head Asia, said, “We are very excited to see Jhalak DikhhlaJaa, the Indian adaptation of BBC Worldwide’s acclaimed format Dancing With the Stars grow from strength to strength each season. There have been more than 270 series of strictly worldwide, in 51 countries ranging from Mexico to South Korea and it has been incredibly successful in India. This is our 9th season producing the award-winning series. More than ever, we are committed to deliver a high octane series with superior international production values. This year, the show’s lavish sets and its take on unprecedented hotness and dance promise to magnify the overall production value which will keep audiences glued to their television sets.”

Ahead of the launch of the show, Colors is undertaking several marketing and digital initiatives to generate conversations around the “hotness factor” of the show. For traditional marketing, a focused outreach incorporating mediums including OOH and on-ground activations have been planned. To further drive contestant and audience engagement, a spate of digital activities is being sketched out under the hashtag #JhalakHottie.

This season of Jhalak DikhhlaJaa will bring together a perfect blend of contestants who will bring classic dance back in-vogue. From choreographer and challenger, to an all-round dance champion – Salman Yusuf Khan, from power chef to dance tadka king – Harpal Singh Sokhi, from Bollywood’s sexy siren to television’s hot property  – SurveenChawla, from YouTube sensation to TV’s first-ever twin pairing – Poonam and Priyanka, from ace comedian to this season’s surprise package – Chutki aka Gaurav Gera, from teenage sensation to hip-pop king – ShantanuMaheswari, from television’s favourite beti to dancing sensation – Helly Shah, from Bollywood’s item girl to TV’s new dancing diva - Nora Fatehi, from reality show queen to dance fanatic - KarishmaTanna, from television heart-throbs to budding dance enthusiasts – ArjunBijlani, Shakti Arora and SidhanthGuptawill all ensure a weekly dose of entertainment for viewers.