The show based on the Cinderella theme will get tougher this year for the contestants. Livon Serum is the title sponsor and Lakmé, Airtel, abof.com, PC Jeweller and Amanté are the co-sponsors 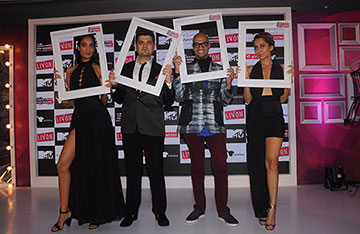 The show based on the Cinderella theme will get tougher this year for the contestants. Livon Serum is the title sponsor and Lakmé, Airtel, abof.com, PC Jeweller and Amanté are the co-sponsors

MTV India is back with its glamorous reality show ‘India’s Next Top Model Season 2’ where four mentors embark on a journey to choose the country’s top model. The second season is based on a ‘Cinderella theme’ wherein mentors Lisa Haydon, Dabboo Ratnani, Anusha Dandekar and Neeraj Gaba mentor 13 young girls in their journey to the fashion world.

CBS Studios International has licensed the India format rights of the reality competition series America’s Next Top Model to Mumbai-based Bulldog Media and Entertainment. Livon Serum is the title sponsor while Lakmé and Airtel are co-presenting sponsors. Abof.com and PC Jeweller are powered by sponsors and Amanté is the associate sponsor.

Sharing insights on the marketing front, Ferzad Palia, Head, Youth and English Entertainment, Viacom18, said, “We will be doing a 360 marketing activity for the show. We will be doing a lot of activations, marketing on television, print and heavy digital promotions. It is a heavily marketed property for us and we will be upping the ante, compared to last year.”

This time the tasks get tougher. Rumbling ramps, underwater tasks, fire tasks and much more will be seen this season. The show will go on for 10 weeks and will end in mid-September.

Akash Sharma, Co-Founder and Executive Producer, Bulldog Media and Entertainment, said, “You can’t do the same show every year. I come from the US and the longest shows come from there. Top Models in America is at season 23. It’s because of the freshness. Every year you make some changes. This year what we’ve done is there is a lot of more reality and story-telling. We’ve kept this Cinderella story, which is something unique.”

On producing more shows in the Indian market, Sharma says there are one to two in the pipeline for the year. Sharma has previously worked on ‘Kya Aap Paanchvi Pass Se Tez Hain’, which was telecast on Star Plus. Sharma is open to working with other broadcasters apart from Viacom18.

About bringing the format to India, Roxanne Pompa, Vice President, International Production and Sales, CBS Studios International, said, “The ‘America's Next Top Model’ format continues to entertain audience all around the world. We are excited to work with Bulldog Media and Entertainment and MTV India to deliver a second season, with the customary ‘Top Model’ style, glamour and entertainment, for the Indian audience.”

Commenting on the association with the show, Anuradha Aggarwal, Chief Marketing Officer, Marico, said, “Livon Serum personifies values of being vibrant, vivacious, always stylish and unstoppable for a girl who believes she is fabulous and always wants to be in the spotlight with salon finish hair. Livon’s new proposition seamlessly fits into the format of the iconic show, India’s Next Top Model Season 2 on MTV which is all about giving spotlight moments to young girls. Through this collaboration, we aim to reach out to our core TG; young, trendy, college going girls. It all about giving them the ever so perfect, camera-ready hair and offering them real life modelling projects which will help them hone their skills of being a perfect model.”

The broadcaster has partnered with Twitter to enhance viewer engagement through some of their never-seen-before services in India. These include activating fan interaction through the newly launched Twitter Blue Room as well as the exclusive camera app on Twitter to make relatable and engaging digital content on the platform. The contestants will undergo a full scale Twitter workshop to fully utilise the power of the medium for fan interaction. Through all these initiatives, MTV India and Twitter want to ensure that the Indian edition of the global franchise is the most talked about property on the platform.

MTV will also use the world’s fastest growing platform, Snapchat, for an exclusive sneak peek of the look and feel of the show as well as real time reactions on MTV’s Snapchat handle MTVIndia. The channel will use Instagram to showcase an exclusive video on the best looks from the show every week.