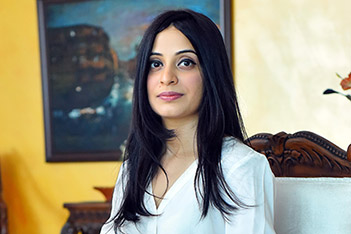 An alumna of St Xavier’s College, Mumbai, Anoushka Adya was born in Delhi and moved to London to pursue a Master’s degree in Marketing and Strategy from Warwick Business School, UK after finishing college. Adya started early and at the young age of 20, decided to stay back in the UK and gain some work experience.

Adya’s journey in the industry began in Glasgow, Scotland where she worked for global companies like Whyte and Mackay, Diageo, Johnny Walker and Russian Standard Vodka among others. She shifted base to London to do sales and marketing for brands like Claridges, The Ritz, Holiday Inn, Hilton London Green Park, etc. She then started working for the digital ad agency House of Kaizen, previously known as Web Liquid Group.

“Up until House of Kaizen, I had only worked for the client side. My time with House of Kaizen is where I really learned the ropes of digital marketing because I was working on the agency side. I understood every aspect of it and worked in various departments like client servicing, media planning, and buying and strategy. I grew there in my role and learnt a lot,” said Adya.

Adya eventually realised that it would be too difficult to chase her dream of going to Mumbai and starting her own organisation if she became comfortable with what she had in London. So she left her high paying job in the UK and landed in Mumbai. It is here that she met Devesh Mittle, a third-generation Managing Director of D.S. Mittle and together they set up Di-Mentions Studios.

The 25-year-old believes it is easier to make the leap when you are young as you have little to lose but when you are older and have built a life and have a family to look after it is much more difficult to take risks and pursue your dreams.

Speaking about her decision to take the leap of faith and invest all her saving to set up Di-Mentions Studios Adya said, “I genuinely believe that it is better not to regret something. So I wanted to give two to three years of my life to trying. I was prepared to start from ground zero with absolutely nothing. Worst case scenario, I would fail and have to start again from where I left off or a notch lower but I wasn’t willing to look back when I was 35 or 40 and say I never tried.”

Today, Adya leads a team of around 22 and is the ‘captain of the ship’ for her organisation and mentor to her team members. A one-stop shop for all digital needs is how she likes to describe Di-Mentions Studios.

Elaborating on the work that Di-Mentions Studios does Adya said, “Di-Mentions Studios is a 360 degree digital ad agency. We start right from meeting a client, understanding their requirement, building their strategy, to giving them options as to what they should be doing. Then we go in to designing it for them, doing the analytics bit for them and implementing it completely.”

It is difficult being a working woman in India and especially if you are working in the creative industry which is not your typical 9-5 job. Adya feels the biggest challenge women face is not being taken seriously.

“Women have been leaving their mark in a lot of fields like design, fashion but not so much in the field of digital marketing. When you are sitting with heads of companies who have years and years of experience on you, for them to take you seriously is a little difficult. But when they speak to you and realise that you have the knowledge you require to be in the field it becomes easier. You just have to stand your ground and then people do take you seriously,” added Adya.

When it is start-up headed by a woman, it becomes much harder to prove herself. When asked how they manage to work around this problem. Adya said, “In our case, a lot of our growth has been through word-of-mouth and relationship marketing. You build relations over time, people see the kind of work you are doing, your clients recommend you to other clients that is how it builds. So even when I am talking to my team, I tell them ‘Content is King’. If your work is brilliant and stands out, then there is nothing else you have to do.”

About the most challenging project they have worked on so far, Adya names their first big client Essel World.

“The team was just at the edge of expansion and we got this new client Essel and at the same time we got Amazon India. So, it was complete mayhem. I had to get people come in overnight. I got freelancers to step in and we worked day and night for a week in order to make sure all deadlines were met because they were all overlapping,” she added.

The Amazon project is the one she has had the most fun working for.

“For the Amazon project we started right from building the strategy. We were given a completely raw slate. We were just told that we have to create a B2B communication and that is how we came up with the campaign “I Amazon my business. Do you?” The idea behind it was that how you WhatsApp or Google things, we tried to make Amazon synonymous with doing business with “I Amazon my business”. The client really liked the concept and they took it all over India. They did hoardings with it, a print campaign, a digital campaign and in multiple languages too. It was very creatively satisfying.”

Adya believes the future of digital marketing lies in analytics and video. She feels that a few years down the line hoardings are going to turn into live screens and television is going to be more interactive.

A travel enthusiast and an avid reader, South America is Adya’s favourite travel destination and if not a digital marketer she would have been a short film maker.

A feminist, feminism for Adya means equality and is not about special rights for women or putting a man down. Feminists are not out there to create an imbalance and only want gender equality is what she feels. She also believes that men too can be pro feminism.

Adya has also started a platform dedicated to woman empowerment called 'Lajja' where women can come and talk about all women related issues and also support other women online.

Speaking about the importance of the name Lajja, Adya said, “The word Lajja means shame. The thought behind naming the platform Lajja was to say that ‘it is not my shame, it is theirs.’ Women should not be ashamed to talk about things. The more and more you push an issue under the carpet, the bigger it becomes.  But the minute you start talking about a problem, there are others who can help you and try and resolve it. Eventually, we want to take ‘Lajja’ to a place where we help them by tying up with psychologists and a few doctors and try and rehabilitate them.”

Her one message to women is to get out there and pursue their passion. “Don’t let anything stop you. I genuinely feel there is nothing a woman cannot do.”