Jain, a young talent who has made it to the top in a short span of 11 years, believes she is here to build stories for a brand 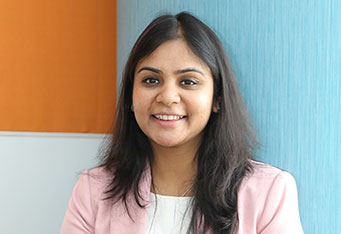 Jain, a young talent who has made it to the top in a short span of 11 years, believes she is here to build stories for a brand

A mechanical engineer from Institute for Technology and Management, Gurgaon and an MBA in Marketing from SP Jain Centre of Management, Aastha Jain, Senior Business Director, ESP Properties, is a young talent who has made it to the senior level in a short span of time. She began her career just in August 2005 with Honda Motorcycle and Scooter India.

She never thought that after two and a half years in Honda Motorcycles, she would land up doing her Management. In 2009, Jain ended up interning in Harry’s, a global food and beverage chain which then didn’t exist in India.

Jain said, “After my stint in Harry’s I realised that I was looking for something in marketing. I definitely didn’t want to end up in an automobile company and that’s when ISO Sports and Entertainment happened to me in July 2010.”

At her stint in IOS, Jain was handling sports celebrities like Mary Kom, Saina Nehwal, Vijender Singh and Suresh Raina among others and her role was to build their brand name. Having closely worked with Mary Kom and her life instances, Jain has learnt a lot from the humble sporting champion.

Not only that, Jain has been a crucial part of integrating 20 brands when Sanjay Leela Bhansali decided to make a movie on Mary Kom. That’s how my journey in entertainment started. From approaching brands from the scratch, Jain kept a positive approach while working on her project to aesthetically include them in the script. “Nobody in the team then knew how the task was to be done, and I’m proud to have worked on it,” adds Jain.

In August 2015, ESP Properties happened. She joined the company as Senior Business Director. Having worked with IOS, Jain was an outgoing person and it was easy for her to build a team at ESP Properties. It did take some effort to build it as they currently handle over 500 brands for the agency.

Having learnt a lot from her previous organisations, Jain knew what approach to have. While she was used to a vertical structure in IOS, ESP Properties taught her how to think horizontally.

At ESP Properties, Jain has worked with brands like eBay and has been a part of Dilwale and paytm campaign, Tamasha and Bharti Axa life insurance promotions and the latest one being Finding Dory and Yakult among others.

What makes Jain proud? “The fact that when planners today plan integrating brands in a movie, they always cite the example of ‘like it was done in Mary Kom.’ Mary Kom was indeed an achievement.”

“I’m trying to build stories here and building stories for a brand. I’ve never come across a client who says I don’t have money for a particular idea. I’ve seen it here and internationally. Building a brand is becoming the focus; how you build it is the challenge. So it’s not just about putting media inventory in place and doing print and television ads. Brands are looking at avenues to build them and that’s where digital is moving now. That’s where entertainment is moving and so is ESP Properties,” adds an energetic Jain.

On a personal front, Jain loves to sketch and dance and has learnt Kathak in her early days. Jain did struggle at the beginning of her career. For Jain, her strength lies in her positive approach and in being a devil’s advocate (at times) while her weakness is she takes her work emotionally.

Five years from now, Jain thinks that India would become an example globally as they will be at par with global marketing practices. That’s indeed a vision from a young budding star.

Lastly, Jain does not idolise a particular person. Jain said, “Having worked with Mary Kom, I have learnt a lot. Mary Kom is such a warm person to meet. She has been a champion multiple times and is a mother of three children, in spite of which she comes across as an amazing person and that’s a learning for me. I have also seen some qualities of her in my mother and my mother-in-law and they’ve always taught me on how to be responsible at work and at home.” Jain also credits her husband for having an open mind in looking at the bigger picture and not looking at materialistic happiness. “So, these people from my life are my idols in some way,” concludes Jain.