Cat Stevens’ ‘If you want to sing, sing out loud’, is her favourite track and her philosophy of life is engraved in her soul. She left her first job at HUL the moment she realised she is not meant for a corporate set-up. Samant doesn’t believe in mediocrity and tries to deliver her best 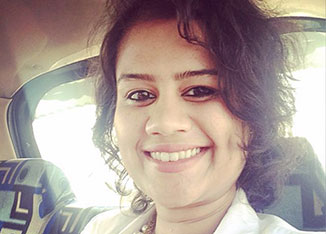 Cat Stevens’ ‘If you want to sing, sing out loud’, is her favourite track and her philosophy of life is engraved in her soul. She left her first job at HUL the moment she realised she is not meant for a corporate set-up. Samant doesn’t believe in mediocrity and tries to deliver her best

It is rightly said that you get opportunities only when you deliver results, and this exactly matches the career track record of Aarti Samant. After finishing her MBA, Aarti joined HUL and left it without giving a second thought as she was more inclined towards the field of creativity than being a corporate person. After two months of self- introspection, she took up an internship at Grey and headed a pitch for a car company, and the agency won the mandate. She left that too in a matter of two weeks because the agency didn’t hire her as an employee. Later, she joined Concept PR and took care of its social media mandates. She finally moved to L&K Saatchi & Saatchi as a Senior Media Executive, where she delivered well over a period of five years and became the Associate Director, Planning and Strategy.

Samant doesn’t think she is yet a creative person and wants to become one someday. She said, “I love challenges and don’t want to do things that are easy and will always take jumps. If you ask me I cannot even draw a single straight line. Planning is definitely a creative thing, but it is more of thinking and putting in madness and that is why I wanted to be around creative people.”

Her day begins at 7 in the morning, no matter how late she goes to bed at night and reaches office before others. On how she balances work and personal life, Samant said, “I don’t look at work as work, but treat it as a game. For me going to work every day is learning and adding more value to someone else’s life. I am one of those annoying people who love Mondays. I wake up early and do yoga. By 12 noon I know how my work will be for the rest of my day. Usually by 7 in the evening, I am out and if I still have work, I do that from home.”

Samant was a sportsperson during her school days and played basketball at the national level. Her hobbies include riding her Royal Enfield bike and travelling. She also loves reading and dancing. Samant is a well-trained Jive and Salsa dancer. She calls herself ‘A work hard and party harder person’.

Samant gives her 100 per cent in whatever she does and doesn’t believe in producing average work. She said, “My dad has always taught me to perform the best and is a self-made man himself. If I make my mind for something, I will go out and give my best. I am not a perfectionist but like to put that extra magic in everything even in the small e-mail I write.”

The landmark digital campaigns she has worked on was the ‘Honey bunny’ campaign for Idea Cellular that went viral and was the most viewed in that year. The other one was Parle-G’s ‘Roko mat toko mat’ campaign, which was very successful and turned the brand into the best in the FMCG biscuit market that year. Samant was awarded as the ‘Most Talented Social Media Professional in India in 2014’. A few of her work pieces has won accolades in the industry.

Samant could not find any particular weakness in herself, but definitely mentioned that she needs to practice more of patience in life. Like every other woman, she also at times becomes vulnerable and doubts her decisions.

Talking about the work pressure she faces, Samant points out, “Work stresses you a lot, as I am responsible for other people’s brand image. I am responsible for my juniors and try to teach them something extra daily.  When I come to work every morning, I think of how to add more value to people’s lives and the company. For that, I keep on questioning myself. When you love your work, it’s not stressful; I think it’s a huge responsibility of being the face of the agency.”

When Samant was heading the Social Media at L&K Saatchi & Saatchi, she used to handle 20 brands at a time. That was the most stressful time of her career. “We have to be 24X7 managing the social media accounts of the brands. Any wrong thing going out in a fraction of seconds cannot be taken back and that could tamper the reputation of big brands. I have made mistakes and that has only made me stronger. I have been more on my brands’ Twitter accounts than mine. Apart from that, I had a very smooth sailing and have happily taken every challenge and opportunity.”

Samant doesn’t have any particular person in mind whom she idolises, but takes inspiration from situations and people every now and then, be it even an intern. She loves to know people around her and maintains a ‘book of insights’ and writes down things she observes and learns. She said, “I don’t believe that a single person can be your inspiration.”

One important thing she got to learn from her early days in the current firm was, ‘one is known by the company she keeps’. Samant shared one incident where she had to be in the shoes of a woman in the mid-30s when she was just 24 years old. She said, “While I just had two years of experience, I was talking to 50-plus clients and telling them what to do with their brands. The clients always used to wonder ‘who is this little girl telling me what to do?’ and for that reason, all the time one of our bosses had to be around.” She started dressing up as a woman in her mid-30s and behaved like senior level people. She started spending more time with senior people and learnt their ways of working.

Samant really wishes that she could have worked on #TouchThePickle and #ShareTheLoad campaigns for Ariel. She added, “In advertising, real insights are coming where planning is playing a bigger role. We all knew these insights beforehand, but never implemented them. I have always thought of these as a planner, that why aren’t we using these insights in advertising. Earlier advertising was about putting the logo in the right place. Right now we are telling the real stories. I believe that when you are honest, people respect you more. The days of gimmicky, promises and offers have gone. So you have to move out there and talk real stories. The day the brands start having a point of view, people start respecting.”

Her philosophy for life is that people should follow their hearts and never do anything unwillingly. A person should be responsible for his or her own action.