The live entertainment vertical of Red FM for the first time brought together Sona Mohapatra, Papon and Lucky Ali and created a magical musical evening 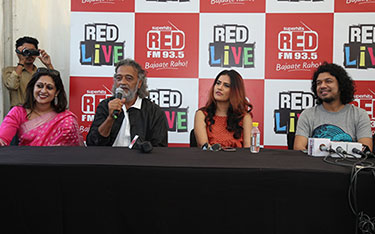 The live entertainment vertical of Red FM for the first time brought together Sona Mohapatra, Papon and Lucky Ali and created a magical musical evening

It was an evening of pure, blissful and unadulterated Indie music as three of India’s most recognised independent music artists came together to create a magical evening of music in Delhi. The concert took place on July 24 at Leisure Valley in Gurgaon.

Lucky Ali, among the most popular artists of the ’90s Indie pop music in India with his melodious numbers such as ‘O Sanam’ and ‘Ek Pal ka Jina’, took the stage in Delhi after a long time and brought a sense of nostalgia to the audience. New-age vocalist and music composer Papon presented his journey of Indie pop, with his stirring songs ‘Khumaar’ ‘Moh moh ke dhaage’ and the latest ‘Bulleya’ from the super-hit movie Sultan. Sona Mohapatra, true to her individualistic style, set the stage on fire with the hit numbers ‘Ambersariya’ and ‘Rupaiya.’

Nisha Narayanan, COO, 93.5 Red FM, said, “Experimenting with formats and genres and bringing out the most entertaining evenings for our listeners is at our core. Indie pop is an iconic genre in India that has brought to the forefront some of the best and most established singers of today – right from Lucky Ali in the ’90s to Papon and Sona in today’s time. It was a delight to get these three performers together on one stage and what better way to celebrate than unwinding into the melody of Indie Pop.

Rajat Uppal, National Marketing Head, 93.5 Red FM, said, “The three artists have a cult following catering to the music taste of a very niche audience. This would be the first time a large format show like Red Live is bringing Sona, Lucky and Papon together.”

The lyrical evening witnessed a large gathering of music lovers swaying to the most loved voices in the music industry.