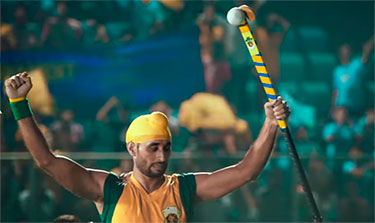 Pidilite has launched a new product variant, Fevikwik Gel, and its TV campaign is a hilarious take on the total control the adhesive provides. The TVC is developed by Ogilvy & Mather and it emphasises the total control characteristic of the gel variant in a playful manner.

The TVC follows a tense hockey match and the expertise of the player in controlling the ball. After a few tricky manoeuvres, the player finally makes the goal. But when his teammates are congratulating him on the win and celebrating, the player suddenly realises that the ball is still stuck to the hockey stick and it was the adhesive that gave him the supreme control over the ball all the while.

Commenting on the concept, Piyush Pandey, Executive Chairman and Creative director, Ogilvy & Mather- South Asia says, “Fevikwik has always been characterised as a hero who comes out with its instant adhesive properties in all sorts of unexpected situations. We wanted to reiterate the heroics of Fevikwik and show an analogy that depicts total control characteristics of Fevikwik Gel.”

The TV campaign will be supported by an integrated digital marketing campaign. Apart from outdoors and increased visibility at trade outlets there will also be a number of demand generation initiatives to reap maximum advantage of the new TVC.