It is an attempt to honour unique ideas that have made a mark. The awards will be presented and webcast live on ground on July 29 at the Taj Palace, New Delhi, 7 pm onwards 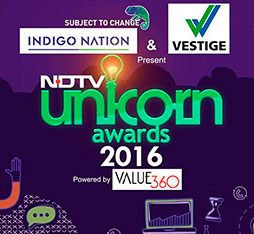 It is an attempt to honour unique ideas that have made a mark. The awards will be presented and webcast live on ground on July 29 at the Taj Palace, New Delhi, 7 pm onwards

NDTV, one of India’s leading news channels, is set to host its first start-up awards. NDTV’s series, ‘Unicorn -- Chasing the start-up dream’, has been leading the charge in discovering the next big idea that can be the next billion-dollar start-up.

NDTV brings the first ever Unicorn Start-up Awards in association with Vestige and Indigo Nation to honour those who have astonished the market with simple ideas and great execution. The awards will witness some of the biggest mentors and venture capitalists from the start-up space in attendance, including Deep Kalra, Founder and CEO, MakeMyTrip, and Sandeep Aggarwal, Founder, Shopclues and Droom.

The awards will recognise dream-chasers who are going to change the way India does business with a stellar jury panel, including R Chandrashekhar, President, NASSCOM, Suchi Mukherjee, Founder and CEO, Limeroad and Raman Roy, a seasoned investor, to name a few.

Start-ups like Grofers, Oyo Rooms, Ola, FlipKart and Shopclues will compete for coveted titles. NDTV has tied up with NASSCOM 10,000 start-ups, as knowledge partner for the awards, and with Tracxn, a start-up intelligence and market research platform, as research partner.

Vikram Chandra, Group CEO, NDTV, said, “We have entered a new business era of start-ups, and it could transform India. NDTV too has expanded its wings in the e-commerce arena and we are growing rapidly. The Unicorn Start-up Awards is our attempt to honour the unique ideas which have made a mark. From here on, we expect the awards to get bigger and better, and to be the benchmark for entrepreneur recognition.”

Tech guru Rajiv Makhni, who is the brainchild behind these awards, said, “From nascent ideas cooked up in a warehouse to booming ventures that are eating up market share and attracting consumers at breakneck speed, NDTV Unicorn Start-up Awards will lift the iron curtain off them all. This is the highest form of recognition for those who have blazed a trail of their own. This is the start-ups' moment to shine and occupy centre-stage on a prestigious platform like NDTV.”