MTV’s ‘Angels of Rock’ is a show by the women, of the women, but for everyone

Sunsilk has joined hands with MTV for this musical journey where four women will tour from Mumbai to the Wagah border with multiple stopovers to inspire and draw inspiration from other women. A blend of travel, fun and music, the show will air from July 31 on MTV at 8pm 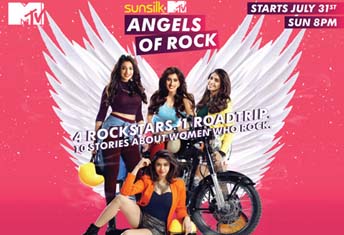 MTV’s ‘Angels of Rock’ is a show by the women, of the women, but for everyone

Sunsilk has joined hands with MTV for this musical journey where four women will tour from Mumbai to the Wagah border with multiple stopovers to inspire and draw inspiration from other women. A blend of travel, fun and music, the show will air from July 31 on MTV at 8pm

MTV has lifted the curtains from its brand new show, ‘Angels of the Rock’. The show, which boasts of an all- female lead cast and a female filming crew, is aimed at celebrating women, their stories of empowerment, self-belief and their incredible journeys.

The makers of the show have roped in Shalmali Kholgade, Anusha Mani, Jasmine Sandlas and Akasa Singh as the lead cast. The four women or ‘Angels’ will tour the country to inspire and draw inspiration from the nation’s women. A blend of travel, fun and music, the show will see the lead cast travel from Mumbai to the Wagah border with multiple stopovers on the way to meet interesting women.

Elaborating on the unique concept of the show, Ferzad Palia, Head, Youth and English Entertainment, Viacom18 said, “MTV always has its finger on the pulse of the youth. And over the last several months, our young viewers have appreciated the way MTV has taken the lead on creating content that showcases women in strong roles – be it through MTV Girls On Top or India’s Next Top Model. And now, we’re going a step ahead and celebrate womanhood in all its glory by bringing our viewers a unique proposition in the form of Sunsilk & MTV present Angels of Rock – a show that’s by the women, of the women but for everyone. The show focuses on inspiring stories of real women blended with travel, fun, and a whole lot of music created by four amazing singers. Sunsilk & MTV present Angels of Rock is a show we are really excited about and proud of and I’m sure our young viewers will also find it inspiring as the stories unfold on screen.”

Commenting on their association with the show and the channel, Priyanka Singh, Senior Global Brand Manager, Sunsilk, said, “MTV is not only the number one youth brand but also an iconic youth brand across platforms. So if you want to do something with the young and you want them to take notice of you, then MTV is the best channel. Also, the values that you see, especially in the content that MTV has created recently, it is about realism and Sunsilk stands for these values. Sunsilk is a youth brand and the brand is about authenticity and real stories. Therefore, on certain paths the brand integrates really well, as both are talking to youth.”

“Angels of Rock is a great concept. It has got all the magic that the young are looking out for and it has got realism also. It has got what the brand stands for, which is positivity, values of self-belief and that is why it was the most natural partnership for the brand,” she added.

Palia believes this association is the coming together of two power brands. “MTV has always had a great relationship with HUL and Sunsilk, the brand is partnering with us for the second time now. MTV is a brand with an unmatched understanding of the youth in India and Sunsilk has been around for young women in India for over 75 years. It’s the coming together of two power brands that understand the audience they’re catering to well. Viewers will get to see the spirit of the Sunsilk girl in true MTV style. She’s a girl who embodies confidence, positivity, believes in herself and loves her girl gang,” he said.

Speaking about the expectation from this association for brand Sunsilk, Singh said, “We want to reach out to more and more people and share our message. Our message that there is this brand which will not only make sure that it is on your side on all those key moments that you need to transform yourself but also that we are a brand that will fuel your ecosystem with inspiring stories. We are going to help them find that ecosystem. We believe that girls have enough fire in them to achieve what they want, what they need is opportunity and friendship or what we call sisterhood to fall back on and through this association we want to take that message further and make young girls aware of it.”