With the new campaign ‘Angrezipanti ko dikhao angootha’, Micromax has moved away from international stars and models and gone desi. BestMediaInfo.com finds out why? 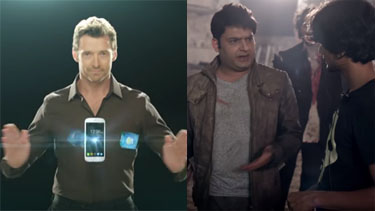 With the new campaign ‘Angrezipanti ko dikhao angootha’, Micromax has moved away from international stars and models and gone desi. BestMediaInfo.com finds out why?

Micromax’s ‘Angrezipanti ko dikhao angootha’ campaign marks a shift in the company’s marketing strategy from projecting itself as an urbane and chic brand to defying norms and social conventions. The new campaign is an instant hit but will it work wonders for the company? BestMediaInfo.com talks to the company and experts in the field.

According to Chief Marketing Officer, Micromax Informatics, Shubhajit Sen, ‘Angrezipanti ko dikhao angootha’ is Micromax’s most successful campaign. The campaign launched to support the Unite 4 smartphone series comprises a TVC, an out-of-the-film association with the Salman Khan starrer Sultan and a digital film with actor and comedian Kapil Sharma. The campaign with the TVC, the film association and the digital film have made over 100 million impressions, making Unite 4 its most successful series, Sen said.

The digital video with Kapil Sharma, showing the stigma attached with not knowing English, went viral. But it wasn’t long before people started pointing out Micromax’s initial campaigns with Hollywood superstar Hugh Jackman as its brand ambassador and international models, and the stark contrast with the new campaign.

Was this a conscious shift in strategy?

Sen says it is not a disruption in strategy but a continuation in the strategy.

Explaining the statement Sen said, “What we unveiled around April was an expression of what Micromax as an organisation should be in the next couple of years. We unveiled a new brand ethos and personality and we articulated it with the phrase ‘Nuts. Guts. Glory’. ‘Nuts. Guts. Glory’ came from an understanding of our consumers, consumers who were willing to go against the odds, defy conventions and norms. When we launched that particular campaign and philosophy, it was on the back of our flagship range Canvas 6. With the campaign we were targeting the urban, upmarket youth and we thought the foreign model and the very international setting was the best way to do it. But at its heart it was still about defiance. But the heart of the brand and the campaign has always been about questioning conventional norms.”

Sen said the ‘Angrezipanti ko dikhao angootha’ is about defying norms and social convention and therefore an extension of the brands earlier campaigns.

“We are carrying forward the same ethos and personality with a very different product line, Unite. Unite is talking to a different target audience and has always been about helping our consumers navigate the phone and create and consume content in their mother tongue. Our creative agency, Creativeland Asia, came up with this campaign. What they uncovered was that there were lot of people who tend to use English as a way or barrier to exclude other people and as a brand we have always believed in being inclusive. That is what translated into the three campaigns you have seen, which is how do you use the phone to transcend this barrier of language that some people put up in the name of education? At heart, we are a brand that wants to question and defy the elitist conventions present in the market.”

Asked whether Micromax’s earlier positioning as an urbane and chic brand will be in conflict with its new approach, Sajan Raj Kurup, Founder and Creative Chairman, Creativeland Asia said, “I see no conflict at all. Micromax will do commercials in many languages. It would be stupid for anyone to interpret it as any conflict in the strategic direction. And our numbers and market feedback shows that consumers are getting it loud and clear. Only a few myopic, not so savvy advertising critiques are interpreting it as a shift. The film is very strong on the product offering of regional language UI. Micromax is only telling a vast non-English savvy population of this country that audacity, victory and success know no language. So, don't get intimidated by the world of English. And that they should go all out with their guts and glory will be theirs.”

On the right track?

According to Naresh Gupta, Managing Partner, Bang in the Middle, Micromax is finally coming back on track with their new campaign. “Micromax has always been a street fighter brand. In its earlier avatar it challenged Samsung and wanted to be seen as the caller brand. Akshay Kumar lent them some respectability but they stayed the street fighter brand. Hugh Jackman was possibly a branding mistake. They wanted to sound international, aspirational, move up the price ladder but most of it was a tough task. I think the brand is now coming back on the right track, wanting to celebrate Indian roots. Inherently I feel this plank may work much better for the brand. The stuff the brand may want to debate is the street fighter tonality. I feel it doesn’t work any longer.”

“In my opinion Kapil Sharma is an appropriate endorser for Micromax. He is relatable and accessible. And he has a way of getting the message across in a pleasant and humorous manner. His appeal cuts across audience and geographies. Hugh Jackman on the other hand is an international celebrity. But in my opinion there would have been a mismatch between the audience that would recognise and relate to him and the buyers of Micromax. Those who know of Hugh Jackman would need some more persuasion to get into the world of Micromax. And for the Micromax users, Hugh Jackman would just be another foreigner endorsing the product,” Wadia added.

“Micromax first tried to appeal to an international audience through Hugh Jackman and then to the youth with their Nuts. Guts. Glory campaign. They need to figure out how they are going to handle the brand. What Coke does as a brand has an impact on coca cola. So what Micromax does with an inexpensive phone and an expensive will impact the brand Micromax. They need to have a better brand architecture to handle this kind of conflict because the brand or corporate name and the product name happen to be the same. So I think more than creative idea or anything, it is the brand architecture that needs to be corrected.”