An avid reader, a blogger and a Twitter influencer, meet Anusree Menon who takes on challenges as opportunities 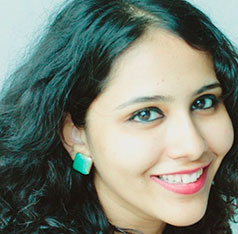 An avid reader, a blogger and a Twitter influencer, meet Anusree Menon who takes on challenges as opportunities

Born and brought up in Mumbai, Anusree Menon is a complete social media buff. She completed her Bachelor in Management Studies from Tolani College in Andheri, Mumbai. “I started working about five years back with FoxyMoron, learnt basics there and then moved to MindShift Interactive and finally joined DigitasLBi two years back.”

“When I was brought in by my former boss in DigitaLBi, there was no formal person to look after blogger outreach or influencer marketing. I was essentially setting things up as there was no direction to it then. I started as a digital media executive and never thought I would be leading a team,” Menon adds.

She explained how the business grew from a few clients to over 20 and now she heads her team as Director Outreach. Some of the major brands the agency works with include names like Budweiser, Frooti, Tata Motors, Nivea, Vespa, Hotstar, Nissan and Datsun among others.

Sharing how she enjoyed working on Tata Motors’ Bolt campaign, Menon said, “The campaign we did for Tata Motors won us an award. In our digital campaign for them, we locked four influencers in a cubical and as their followers tweeted for them, the key fell on them and one of them would win a car.”

Menon has been constantly striving for DigitasLBi to be seen as an agency with the capability of influencer marketing among others. As she feels it’s not just a social media agency. The likes of Twitter and Google are involving influencers in a very big way and brands are now stepping up. Evolved and informed clients are taking steps towards it. They’re not doing it because it’s a mandate, but because they know the need of it.

While Tata Motors was one of her achievements, one of her personal favourites is the ‘Clean and Clear’ campaign. She loved working on the client as she’s done everything from the scratch for the brand. Be it influencer marketing via bloggers or associating with YouTubers for the brand. Menon says, “We ran an advocacy programme for the brand and that was something that gave the brand a lot of mileage. I feel proud to have worked on the account.”

She adds, “We worked with a mix of Blogger and Vloggers across different levels of authority. We worked with new bloggers and established category experts at the same time. Overtime, they have continued to advocate the brand. The idea is to continuously work with influencers and also involving them in our social media campaigns.”

A few examples of various blog and vlog collaborations that DigitasLBi has done for Clean and Clear:

“Challenges are also opportunities and that’s how I look at it,” says Menon, “When I am working on a challenge for a client, I look at it as an opportunity to educate them on how things really are.” In her opinion, one cannot design campaigns to trend on Twitter. That cannot be the only objective of tapping social media.

On the other hand, Menon is glad that Twitter as a platform is evolving, if not in India, at least globally. She personally liked Twitter’s #BlueRooms campaign which they recently did with influencers in respective industries. This is one of the campaigns Menon wishes she were a part of.

Sharing another favourite campaign, Menon loved working on Nivea’s Mother’s day campaign #SayItWithHugs. She said, “During Mother's Day, we worked with mommy bloggers from different genres to talk about the special bond between them and their kid and the power of mom's touch and hugs. This was captured in a candid video that was shot by them and shared on their social channels.”

She adds, “The idea was to build the care equity for Nivea. Simultaneously, a social media campaign was run to collect the maximum number of mommy hugs through images shared with us. We collected 10,000 hugs. To conclude the campaign, we gave a sweet surprise to some of the mommy bloggers with the hugs that we collectively received from our audience.”

?The Nivea campaign is captured in this video:

Menon feels her strength lies in convincing clients to do influencer marketing. The weakness is also the same as clients think that anything is possible. Influencer marketing has not yet reached a stage that it has in Europe or America. Hence it will take time.

Having closely worked with bloggers and being an avid reader herself, Menon has her own blog called ‘musingsofabombaygirl.com.’ Currently, she is reading a book by Vikram Seth and loves reading authors like Rohinton Mistry and Jojo Moyes among others. Binge watching on Netflix is another thing which Menon likes to do.