Lindsay Street in Kolkata witnessed the wedding of the season when Manyavar tied the knot with Mohey, taking the onlookers by surprise. Manyavar, known for its ethnic and wedding wear for men, has now forayed into women’s ethnic wear segment with the launch of Mohey 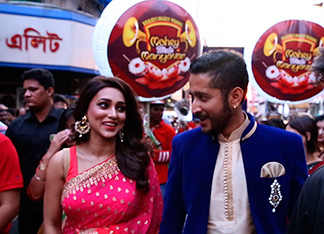 Lindsay Street in Kolkata witnessed the wedding of the season when Manyavar tied the knot with Mohey, taking the onlookers by surprise. Manyavar, known for its ethnic and wedding wear for men, has now forayed into women’s ethnic wear segment with the launch of Mohey

Kinetic India, an out-of-home (OOH) advertising agency, conceptualised and executed this wedding event between the ‘groom’ Manyavar and the ‘bride’ Mohey to support the launch of Manyavar’s new fashion line for women.

A mannequin adorned in Mohey attire arrived in a palanquin accompanied by a band playing instrumental wedding along with an entire ‘baraat’ for the opening of the store. Backlit pillars and lollypops were used in the vicinity of the store to create further visibility. Apart from the wedding event, Kinetic used backlit inflatable balloons in market areas, look walkers were used selectively for a personalised impact, and billboards, pillars and station signages were put across the city for a widespread reach and omnipresence.

“The brief given to us by Manyavar was to highlight the concept of the brand Manyavar and Mohey, connect both the brands and highlight the 10,000 sq ft area of the store,” said Rajeeb Bhattacharya, AVP East & South, Kinetic India.

“The idea behind coming up with this wedding concept was to create an excitement and disruption at the same time in the Lindsay Street area,” Bhattacharya added.

It was not easy for Kinetic to pull off the campaign on Lindsay Street, a very busy road in Kolkata. They had to acquire permission from the corporation and from the two busy markets in the area.

“To create some kind of visibility with OOH in Lindsay Street was a huge challenge for us. First of all since there was no proper out-of-home media there, we had to create temporary media. Visibility was created with the temporary media and frequency. Then to create excitement, we incorporated the palanquin and the ‘baraat’. It created a lot of excitement in one of the congested areas of Kolkata,” said Bhattacharya while speaking about the challenges they had to face while executing the campaign.

Speaking about future campaigns, Bhattacharya said that more stores will come up in cities such as Guwahati, Ahmedabad and Delhi in the coming months and considering the feasibility and possibility Kinetic will explore the opportunity.

“This module was successful. The events in other cities will be similar to this one with a little bit of changes because the formats we have used were all successful. But we don’t know if we can use the same format in other cities as well because of the feasibility and permission problem,” he concluded.

“We are delighted that for the first time we have rolled out such an activity to announce the arrival of our new brand Mohey into the mindscape of the consumers in a most interesting and intriguing way to draw maximum attention. The OOH activity complemented the ground activity in a most compelling way, which was in line with our brand position and imagery. We would give the credit to the OOH team for such a well thought idea which got executed with precision,” said Ravi Modi, Managing Director, Manyavar.