With over 15,900 hours of content to offer in Southern languages, Hotstar has now decided to hard sell the app in the market 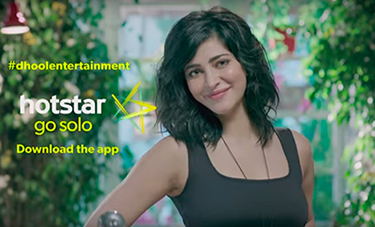 With over 15,900 hours of content to offer in Southern languages, Hotstar has now decided to hard sell the app in the market

Roping in superstars of the south, Mohanlal, Allu Arjun and Shruti Hassan, Star India has put out an impressive attempt to attract the audience from the South India market towards its OTT platform Hotstar. Continuing to hang on to its positioning as ‘Go Solo’, the broadcaster has released three ad films to be promoted in the four southern markets.

Offering as much as 15,900 hours of content in the four languages -- Malayalam, Kannada, Tamil and Telugu -- the company has now launched an ad campaign to possibly hard-sell its mobile application.

The ad takes into consideration the popularity of the stars in the four southern markets -- Andhra Pradesh, Kerala, Telangana and Tamil Nadu. Mohanlal is shown at his home, trying to analyse a film script while enjoying Hotstar. Arjun is shown trying out dancing steps and Hassan is at a music rehearsal background.

The Allu Arjun TVC has already done over 1.9+M views on FB, Hassan’s film has over 5.87 lakh views while Hotstar has been downloaded by nearly 60 million viewers in its 15-month journey. Expecting the response to catapult to greater heights in the southern markets, the celebrities were selected on the basis of their talent, fan following and immense popularity across each state.

Ajit Mohan, CEO, Hotstar, said, “Hotstar has established itself as the primary screen for young India. We are the only platform that showcases and curates the best of south movies and TV shows, all for free to users. We are keen to showcase this extraordinary offering to four of the most extraordinary states in the country.”

The campaign is designed for the young digital audience. While celebrity engagements are an attraction, showing them in his or her real life can be more exciting. Hence, the idea was to present the real persona of all these multi-faceted stars through an engaging and a playful conversation.

The films have picked up cultural nuances of each state and have presented it in a contemporary tone to resonate it with the young. The print ad campaign shows Hotstar as a rescue remedy from any mood. The catchy hashtags (translated as #kickassentertainment) are catch phrases of today’s youth. Each communication signs off with Hotstar as a preferred destination for movies, serials and sports.

The launch will be followed by a six-week multi-media campaign featuring Allu Arjun across digital, TV, print, outdoor and radio.

The Philosopher’s Stone along with the creative communications team of Hotstar (in-house) has conceptualised the campaign. The in-house team has executed the entire campaign.

K Madhavan, Managing Director, South, Star India, said, “We have witnessed a tremendous surge in demand for local language content in the South. These celebrities have a deep connect with the youth and a phenomenal fan base that will help us widen Hotstar’s audience in each state. People here will be excited to watch their favourites at a time of their convenience and free of cost. Hotstar is already consolidating its presence in South by providing a superior digital service to both the fans and the eco-system of movies, television and brands in general.