Conceptualised by DDB Mudra, the campaign is an extension of Big Bazaar’s ongoing ‘Shubh Shuruaat’ campaign and attempts to touch its consumers with ‘Neki Mubaarak’ 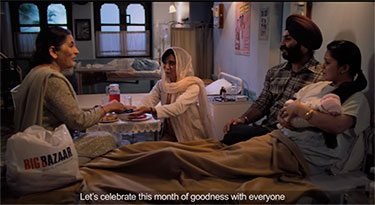 Conceptualised by DDB Mudra, the campaign is an extension of Big Bazaar’s ongoing ‘Shubh Shuruaat’ campaign and attempts to touch its consumers with ‘Neki Mubaarak’

The holy month of Ramzan marks the spirit of goodness. To spread the feeling of empathy, care and neki (goodness) among people, Future Group’s Big Bazaar hypermarket chain has launched a television commercial ‘Neki Mubaarak’ (Best wishes of goodness) in keeping with the brand’s promise of ‘Making India beautiful’.

Conceptualised by DDB Mudra, the film was launched on YouTube on June 22 and will launch today on television.

The campaign comes as an extension to Big Bazaar’s ongoing ‘Shubh Shuruaat’ campaign and attempts to touch its consumers with ‘Neki Mubaarak’ (best wishes of goodness). With the brand’s mandate of ‘Making India Beautiful’ and over 180 million Indians fasting this month, the campaign further reinforces the brand’s inclusive nature and amplifies their commitment of celebrating moments dearest to all the customers.

Rahul Mathew, Creative Head, DDB Mudra West, said, “Festivals are actually a celebration of values, but today many of them have just become celebrations. Big Bazaar wanted to use the occasion of Ramzan to celebrate the values that it stands for, because it's these values that'll truly help in making India beautiful.”

The film pulls a slice from the viewer’s life and celebrates the goodness present in all human beings. It features the star cast comprising Sayani Gupta (of Margarita with a Straw fame) and veteran actress Archana Puran Singh.

Sayani Gupta plays the role of a medical practitioner named Heena Qureshi and Archana Puran Singh plays the role of a mid-aged lady from a North Indian family. Set in the background of a small town hospital during Ramzan, the North Indian family seeks urgent medical attention for their young expecting female member. Here, Heena who works at the same hospital, steps up to the occasion and chooses her duty over her need for food, after the daylong fasting. Witnessing this dedication is a mid-aged lady (played by Archana).

The next day, Heena comes for her rounds in the ward. Appreciating Heena’s gesture from the day before, the mid-aged lady and her family arrange a food spread for Heena and request her to break her fast for the day with them. Heena obliges. While eating, she enquires about the baby’s name and the mid-aged lady says, ‘Heena’. Heena’s dedication towards her duty and the family’s sense of gratitude help them rise over their differences of religion and culture barriers, becoming one.

Sonal Dabral, Chairman and Chief Creative Officer, DDB Mudra Group, said, “Ramzan is a month of doing ‘neki’ and performing good deeds is at the heart of this festival. In keeping with its theme of 'Making India Beautiful', Big Bazaar decided to celebrate the spirit of Ramzan through a beautiful story about goodness. We are excited about this campaign and we hope in its own little way it will promote the spirit of 'neki' this Ramzan.”

Amit Kekre, National Strategic Head, DDB Mudra Group, added, “Brands are nothing but the betterment they bring in people’s life. This is especially true in times torn with turbulence, when brands mustn’t just sell goods, they must create good. They shouldn’t only sell stuff, but stuff society’s conscience with goodness. These are times when we need brands to be the ‘beacons of better’. We are glad that through Big Bazaar, we are able to spread messages of equality, harmony, beauty, peace, love, brotherhood, hope – messages that make India beautiful.”

This multimedia campaign is being led by the ad film and is being amplified by Print, OOH, Digital, On-ground and in-store and radio activation.