Today the consumer is the King, says PepsiCo’s Shivkumar 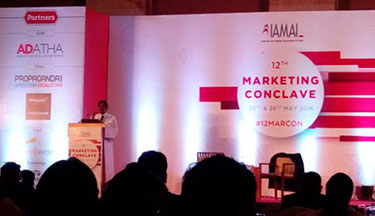 Today the consumer is the King, says PepsiCo’s Shivkumar

The first session at the 12th marketing conclave of the Internet and Mobile Association of India (IAMAI) opened with a keynote address by Tushar Vyas, Chief Strategy Officer, GroupM, South Asia.

Vyas briefly spoke about the importance of programmatic and big data. In this new age digital India, Vyas thinks data analytics and big data will play an important role. Not only that programmatic will also play a key role in analysing consumer behaviour.

After Vyas, PepsiCo India’s Chairman and CEO, D Shivkumar threw light on ‘mobile doubts’ sharing three key aspects – ‘Brands are time saving devices, we live in a time starved world and mobile devices are huge time saving instruments’. Shivkumar believes the combination of these aspects is something that brands should work on.

He went on to explain that everything that is hyper local was going to be beneficial for the brand. Some doubts raised were -- Is mobile effective? How much money to spend? Are women truly online? And lastly the question on measurement.

Answering the doubts, Shivkumar said that mobile is effective. In a nation of 1.2 billion people, millions of people have smart phones and a lot of them have internet. Over 50 per cent of search, shopping, travel and YouTube streaming happens on mobile. Not only that, e-commerce has seen the rise of categories which never could have reached the consumers without the online platform. Luxury brands, vegetables, innovators and a lot of categories today reach the consumer through online.

Shivkumar advised that if the marketing budget of a brand for the year is about Rs 10 crore then, one should spend Rs 35 lakh every month on digital which is about Rs 5 crore for the year. He explained that if one wants reach and result, then digital will give them the same. He said there was no need to waste time on television, print and other mediums.

Speaking about women being online, he said about 40 per cent of Indian woman were online today. Most of the time, they are looking for recipes. PepsiCo India had invited recipes for their ‘Quaker oats’ and they got a huge response. Today, they have so many recipes for oats that they don’t know how to utilise it. That is the power of digital, says Shivkumar.

Measurement is a problem in almost all mediums, apart from television. So if a marketer is worried about how to invest in a particular medium based on measurement then it’s not true. One needs to see the reach, engagement and how the medium has worked for the brand, said Shivkumar. He concluded by saying, ‘Today the consumer is King, Queen and has a voice.’