With many big-ticket, expensive properties pitted against ‘The Kapil Sharma Show’ on Sony, how did it affect the debut episode of the show and what will be its future course? 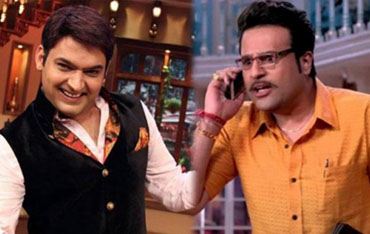 With many big-ticket, expensive properties pitted against ‘The Kapil Sharma Show’ on Sony, how did it affect the debut episode of the show and what will be its future course?

Spoiling viewers with big ticket properties is one of the magic sticks that the Hindi general entertainment channels have always resorted to, especially on weekends. The previous weekend, April 23-24, 2016, was abuzz with such for GEC viewers, with the Indian Premier League being the icing on the cake.

As the popular cricket tournament picked up steam in its ninth season, the GEC players have overcome their fear of launching new, bigger and expensive properties parallel to the IPL. Owing to this, the recent weekend witnessed the launch of ‘The Kapil Sharma Show’ (9 PM) on Sony and the premier of the blockbuster ‘Bajirao Mastani’ (9 PM) on Colors, both playing bang opposite live IPL matches on Saturday, April 23. Continuing with a wide menu on Sunday, the GECs offered ‘TKSS’ on Sony, ‘So You Think You Can Dance’ (8.30 PM) on &TV and IPL on the Sony Max.

This ought to have created a division of eyeballs within the genre. Majority of viewers thrive on the Hindi GECs as their regular dose of entertainment, and for them it was a treat on April 23 and 24. While many are predicting The Kapil Sharma Show (TKSS) to have a lot of potential still, some others have strongly commented on the repetition of many major aspects by ‘India’s favourite comedian’.

Continuing to earn viewer attention, the show clocked 8,649 Impressions, bent towards male audiences with 4,462 Impressions. ‘So You Think You Can Dance’, an expensive property on &TV, also showed a marginally skewed male preference with 1960 Impressions out of a total 3827 Impressions.

In addition to all these, ‘Comedy Nights Live’ was also there on Colors from 10 PM on weekends. This is the show that replaced ‘Comedy Nights with Kapil’ on the channel in January.

The question now remains whether the share of viewership for the movie premier and the dance talent hunt show’s debut episode will come to TKSS or the IPL? It is indeed a little early to decide or predict on that, since, ideally, any pattern can only be drawn on a four week viewership data.

Nonetheless, an analysis of the possibilities would be worthwhile because the first weekend of TKSS was not the end of the excitement for media analysts, number crunchers and media planning experts. Right in the second weekend of TKSS and So You Think You Can Dance, Colors has launched its other big ticket reality property, ‘India’s Got Talent’, for the seventh season.

Amol Mohandas from GroupM applauded the comedy show for strong ratings, despite that the protagonist is in playing his second innings on television. “A lot of things change with a change in platform (read channel) – like the reach and loyalty of audience towards a channel. But the show has still done very well, as per my analysis. However, the consistency is better mapped later because the show was very well promoted which might have resulted in heavy sampling. At least a 4-5 week pattern is good to consider before saying anything. But, yes, my sense is that the choice between IPL and TKSS will be a tough one for the show because people know that they can go back to the show in repeats, but sport is best when it is live.”

People like Ranbir Kapoor, Varun Dhawan and even Ranveer Singh get involved in the script and make it so much more fun. Then there are other set of celebrities like Amitabh Bachchan, Akshay Kumar, Salman Khan and Shahrukh Khan - the real tier one - who will get watched anyway.

Mohandas also pointed out how more buzzing celebrities will be a better stunt to be played to take the show to the pedestal.

However, another media expert, PM Balakrishna, clearly stated that the real sampling of the show will start once IPL ends. “There is a huge bunch of new viewers which TV gets owing to IPL. I have a sense that the channel is probably expecting to grab this swelled TV viewership. Once a person is on TV for a certain slot for 60 days, he is bound to look for options and search for stickiness. Plus, one must not forget that unlike the other top flagship GECs (read Star Plus, Zee TV and Colors), Sony has a huge male affinity due to its CID, Crime Patrol and similar shows.”

Every concept, idea and programming on television is ought to creep into the fatigue zone after a point and there is no shying away from that. Everyone believed that Comedy Nights with Kapil on Colors had already been milked enough and that the show had outrun its life. But the initial numbers on Sony have shown a different story: people have come to check it out.

Balakrishna felt that rules do change and one has to wait to see how. “Comedy is more male-led. Even for advertisers, Sony has always been a channel for males and females both.”