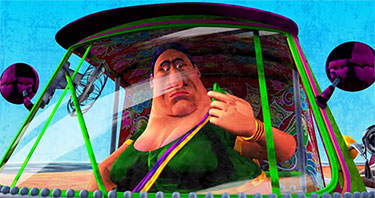 Having grabbed several awards earlier, Studio Eeksaurus Founder and Creative Director Suresh Eriyat has won national award for his films Fisher woman and Tuk Tuk under the Best Animation Film Category. The award was presented at the 63rd National Awards ceremony by the President of India Pranab Mukherjee.

Eriyat was recently applauded for series of ad-films which he created for Rajasthan tourism, in association with Ogilvy & Mather. The six films titled ‘jane kya dikh jaye’ were much in news and so were the makers in January 2016.

Prior to that, his studio Eeksaurus bagged the first ever award for India at France’s prestigious International Animation Film Festival Annecy Cristal Award in the Commissioned Film Category for their film on child labour for Rotary International, titled ‘Fateline’.

The jury at Annecy called the film a fantastic mix of technique and aesthetics, a kind they had never seen before. The festival received a total of 2,604 films from 95 countries this year, of which 199 films made the official selection.

As for the national award, Eriyat said, “This is a moment of pride for the entire animation industry of India. There are two aspects I would like to highlight which are momentous, one being felicitated by the President of India at the most prestigious national event and the other is after years of hard work and persistent belief in our industry, being applauded for our first short film Fisherwoman and Tuk Tuk that has rolled out from our studio has changed perspectives. We have been working non-stop not only to create great films through live action and animation, but also to create stories which stay in the heart of our viewers forever. We will be soon showcasing this movie to our network and fraternity in the month of June. The entire team supercharged after repeated recognitions both nationally as well as internationally, is ready to roll out the next big one from our studio this year. The film so far has won over 13 national and international awards with more than 35 official selections. ”

The short film is set in a coastal village, where the heat of the Indian summers, the stench of dried fish, the triumph of human endeavour against odds, the thrill of adventure, the over excited colours and loud music that blankets the solitude weave a story of a lonely Fisherwoman who lives her dreams through her hard earned Tuk Tuk.