The launch of the high definition channel was timed with Maharashtra Day. The channel will premiere the multi-starrer, ‘Lek Majhi Laadki’ at 9 PM on Monday 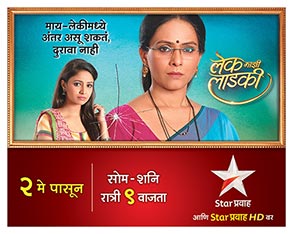 The launch of the high definition channel was timed with Maharashtra Day. The channel will premiere the multi-starrer, ‘Lek Majhi Laadki’ at 9 PM on Monday

Star Pravah HD strives to enable viewers of Marathi content to experience the world of high definition television. For MGE viewers the experience of better picture quality and sound began with the world television premiere of ‘Dagdi Chawl’ at 1 PM and 7 PM on Sunday, May 1.

The new shows lined up for Star Pravah viewers includes a multi-starrer fiction show ‘Lek Majhi Laadki’, which will premiere on Monday, May 2 at 9 PM. The emotional story of a mother and daughter, who are separated at birth, but long to unite, is being launched in the same week as Mother’s Day, which falls on May 8. Maharashtra’s favourite real life couple, Aishwarya and Avinash Narkar, will come on screen in ‘Lek Majhi Laadki’.

Since its inception in 2008, Star Pravah has been at the forefront of entertaining Maharashtrian viewers with culturally relevant stories, like the mega historical saga of ‘Raja Shivchatrapati’, family dramas like ‘Agnihotra’, ‘Pudhcha Paaul’ and ‘Devyani’. Speaking of the launch of Star Pravah HD, a Star India spokesperson said, “With the increasing demand for High Definition TV viewing, this was a great opportunity for the channel to enter the space. We have always strived to offer best to our viewers. With the launch of our HD channel, the Marathi general entertainment viewers will now be able to enjoy their favorite shows, events and blockbusters in richer colours, greater clarity and sharper images.”

Star Pravah HD is among the first few Marathi channels to be available in high definition and is part of Star India’s effort to start a HD revolution in the regional genre. Star Pravah HD will be available on all leading carriers. To begin with, the Star Pravah HD schedules will be similar to those of the SD Channel.